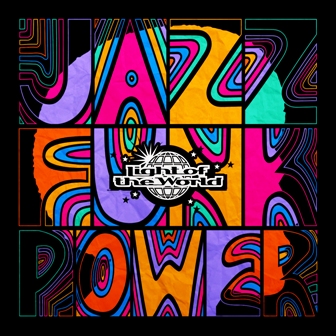 Light of the World’s ‘Jazz Funk Power’ album has been one of the most eagerly awaited long players of recent months. One of the reasons is that the Brit Funk pioneers have such a great track record and a music CV that’s stuffed with soulful conviction. Secondly, in recent months, LOTW have allowed us an album preview via three wonderful, appetite-whetting tunes. First there was the energized ‘Temperatures Rising’ followed by the more mellow summer vibes of ‘Summer Girl’ and ‘Sunshine Island’. That trio still sound good, fresh and vital on the concise ten tracker and the great news is that there’s plenty more that’s just as good.

The trimmed down LOTW (the band’s core nucleus is Gee Bello (Vocals/Percussion), Nat Augustin (Vocals/Guitar) and Mel Gaynor (Drums)) hit the ground running on ‘Jazz Funk Power’ with the incredibly strong opener, ‘Soul Reflections’. Musically and lyrically, it’s almost semi-autobiographical; it looks back to the great old soul radio days; suggests that their  music is rising again from the ashes and en route it name checks, amongst others, Marvin Gaye. It’s a totally “up” and optimistic vibe which is echoed throughout the album. ‘Heart To Heart’ and ‘Saturday’ are looser and mellower but not a jot less groove-heavy while ‘Prescription For Funk’ is just that. The album’s big slowie is ‘Head Over Heels’… tender without being sentimental, while the album closer, ‘Mi Gusta La Samba’ is, as the title implies, a huge samba school romp and finishes the collection where it started – in foot tapping, head nodding, dancing  mood.

Light of the World have been away far too long. Gee Bello explains the reasoning behind their comeback: “The album came about after realising that many of our favourite bands like Earth Wind and Fire, Incognito, Jamiroquai, Tower of Power, Brand New Heavies, Kool and The Gang and Chic were still enjoying success many decades later. With our records still being played across national and worldwide radio with digital streaming platforms too, we realised our music also has a timeless quality, therefore Jazz Funk really does have Power and Energy … so it felt right to name the album Jazz Funk Power”. Bob on! Can’t add much more to that save to say that LOTW’s wonderful ‘Jazz Funk Power’ is officially released on September 25th. Welcome back!

Tags: LIGHT OF THE WORLD