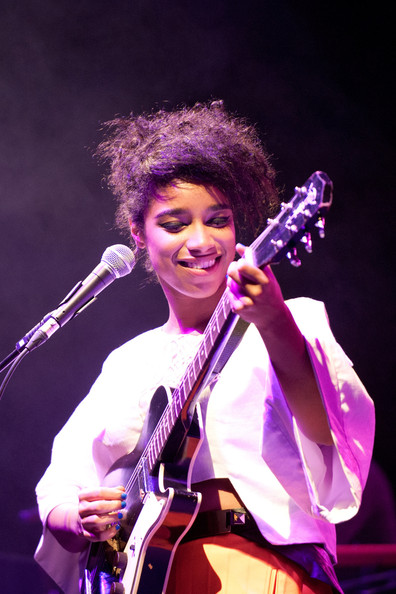 It was clearly apparent from her very first album, 2012’s ‘Is Your Love Big Enough,’ that Lianne La Havas is a unique talent whose eclectic blend of musical influences make her difficult to pigeonhole.  Certainly, the 26-year-old London-born singer/songwriter possesses a soulful set of pipes that wouldn’t sound of place in the R&B world but accompanies herself with an idiosyncratic guitar style that combines folk-infused finger-picking with mellow jazz chords. Pop, funk and rock elements are also present, making her sound at once elusive and alluring.

What her recordings don’t reveal, though, is that La Havas has an amiable and disarming stage presence, which, as the audience at last night’s Cheltenham Jazz Festival gig discovered, helped to create an immediate sense of rapport that resulted in a relaxed ambience and heightened the concert’s endorphin-inducing feel-good factor.  Glammed-up to the max – with coiffed hair, an elegant outfit, and tottering on impossibly high heels – the guitar-wielding siren resembled a 21st century version of gospel-rocker Sister Rosetta Tharpe. Introduced by radio DJ, Jo Whiley – the concert was broadcast live on BBC Radio 2 – the singer began alone on stage with a rendition of the delicate and poignant ‘No Room For Doubt,’ her sweetly soulful tones riding on a wave of gently-undulating guitar chords.

After this, a four-piece band joined her on stage but on several occasions throughout the 90-minute set, La Havas would be left alone in the spotlight to present some of her more intimate songs like ‘Ghost’ and ‘Midnight.’ Her repertoire drew heavily from both of her albums and among the numerous highlights were a breathtaking’ Unstoppable’ (taken from her latest LP, the Grammy-nominated ‘Blood’), which combined a heavy R&B groove with ethereal vocals and the autobiographical ‘Green & Gold.’  The shimmering ‘Tokyo’ framed La Havas’s haunting vocals in a jazz-funk context while the rousing ‘Is Your Love Big Enough’ demonstrated that the singer is not afraid to ramp up the volume and embrace a big, sing-along pop chorus.

For an encore, La Havas provided an emotive reading of Prince’s tender ballad ‘Sometime It Snows In April’ – a heartfelt homage to her late erstwhile mentor. It was, then, an impressive performance – and one that will linger in the memory of those who witnessed it for some considerable time.