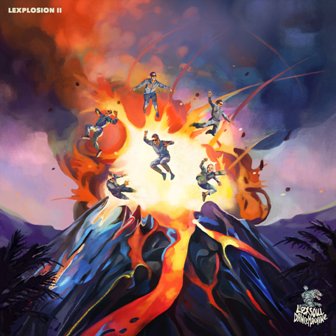 The former Soviet republic of Estonia has been the source of some decent blue-eyed soul of late. That country’s Rita Ray impressed many with her ‘Our Love Will Rust’ album, while guitarist U-Nam’s collaboration with the Estonian Lutz Krajenski Big Band was also well-received. Add to that the esoteric jazz talents of Kari Overhand and you have a surprisingly decent music scene over there in Estonia. Now blazing out of the same Baltic territory comes Lexsoul Dancemachine who have just unleashed (that’s the right word, by the way) their third album, oddly called ‘Lexploison II.’

Right now we don’t have too many details on band members and CVs but the art work suggests a sextet and  we’re told that across the concise 8 tracker that core is augmented by US funk axe star Cory Wong and Brazilian percussionist Luiz Black . The album’s other guest is Estonian violinist Liis Lutsoja. She’s there on ‘Nu Reality’. Now you’d think that a violinist might be feature on something laid back or soporific. Buy no… ‘Nu Reality’, like most of this album, is a slice of blazing old school funk. Ms L just adds a bonkers violin solo!

That “blazing funk” is this album’s signature sound – signalled from the start with ‘Basics’ and concluding with ‘Supersoul’. In between there’s all kinds of funk shadings including a take no prisoners (lyrically and musically) ‘Sex’. The only hiding place from the relentless driving funk comes via ‘Entertainment’ – no way a “down” moment and nowhere near a ballad but just a little more restrained and none the worse for that!

The album’s out now on CD, digital and vinyl and if you’re a serious funkateer you may well want to investigate!