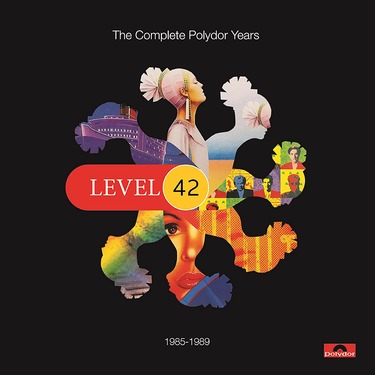 Released last year, the first volume chronicling Level 42‘s stint at Polydor Records charted the beginnings and meteoric rise of the jazz-funk quartet from the Isle Of Wight. Now, comes this second and concluding volume, which captures the band at the peak of their commercial powers in the second half of the ’80s. By then, they were playing in front of thousands of people in sold-out arena venues, both as headliners and touring as a support act to genuine megastars like Madonna.

Just how potent Level 42 were in concert is revealed in the first album that opens this collection; ‘A Physical Presence,’  a live double album recorded at several venues across the UK. It captures the band’s driving energy, particularly via Mark King’s percussive slapped bass lines and Boon Gould’s searing guitar solos, which shine brightest on the opening cut, ‘Almost There.’

The first studio album in this 10-CD compendium appears on the third disc,  ‘World Machine,’ a bonafide double-platinum blockbuster for the band in 1985 where their music was enhanced by co-producer Wally Badarou’s technological trickery. The album’s killer cuts include the anthemic  ‘Something About You ‘ – arguably one of the ’80s definitive songs – and the plaintive beat ballad, ‘Leaving Me Now,’ which features Mike Lindup’s beautiful piano lines.

1987’s ‘Running In The Family’ album raised Level 42’s stock even higher by going double platinum in Canada as well as the UK; its success was mainly down to the hit title song along with two other big singles, ‘Lessons In Love,’ and the hauntingly elegiac ‘It’s Over.’ It was an album that showed how far Level 42 had travelled from their musical roots; evolving from purveyors of club-oriented jazz-funk grooves into accomplished mainstream pop tunesmiths.

By 1988’s ‘Staring At The Sun’ – their final Polydor album – Level 42’s popularity was just starting to wane although the album still went gold in the UK. Significantly, it was the first of the band’s albums not to feature the Gould brothers – guitarist Boon and drummer Phil – who both quit and were replaced by Alan Murphy and Gary Husband respectively.

Discs 6-10 in the collection scoop up the band’s 7″ singles, B-sides, 12″ singles (there are two CDs devoted to these, which features remixes by Shep Pettibone) and a varied assortment of miscellaneous bonus material that includes live tracks and some rare remixes that have never been on CD before.

As with the previous volume, the sound is impeccable and the packaging is superb. Noteworthy, too, is the accompanying booklet, featuring quotes and reminiscences from all the key protagonists, which helps, along with the music, to bring the late 1980s vividly back to life. A stupendous package.