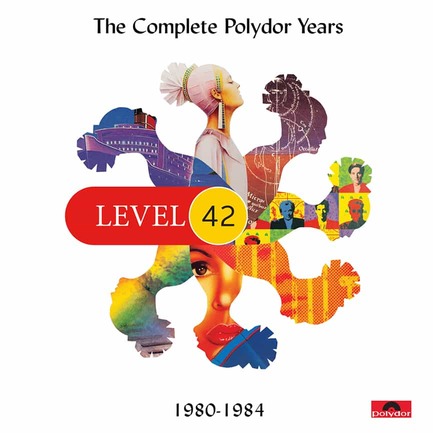 Between their debut UK chart entry, 1980’s ‘Love Meeting Love’ and their final smash, ’94’s ‘Love In A Peaceful World,’ Level 42 racked up an astonishing 29 hit singles in Great Britain, which gave them a ranking of No. 112 in the Top 500 British chart acts of all time. That’s undoubtedly a remarkable feat for a group that had humble beginnings in the Isle of Wight and started out as a jazz-funk outfit powered by Mark King’s percussive slapped bass before morphing into a sophisticated and globally successful pop-soul outfit who reached their commercial peak in 1986. (Some have since called the band’s music “dance-rock” but it’s a description that lacks a fundamental understanding of the group’s aesthetics).

Fast forward to 2021 and the iconic group, which has undergone several different incarnations over the decades, is still going strong and has a tour scheduled for later this year. Present and past members of the group contributed to this retrospective, the first of two box sets celebrating the group’s fertile tenure with Polydor Records. You’ll find 10 CDs in ‘The Complete Polydor Years – 1980-1984’, which retails at a very reasonable £44.99 if you purchase it directly from Cherry Red’s website. There are five studio albums, plus separate discs containing 7″ singles, B-sides, 12″ singles and rarities, and an additional set of 12″ singles, concluding with a raft of bonus material. It all adds up to a comprehensive collection that should put a smile on the face of Level 42 completists.

The group’s eponymous debut album released in 1981, which included the hits ‘Love Games,’ ‘Turn It On’ and ‘Starchild’ as well as some scintillating funkafied instrumentals, is a stunning showcase of the unique musical alchemy created by singer/bassist Mark King together with singer/keyboardist Mike Lindup and siblings Boon and Phil Gould (who played guitar and drums respectively).

The group’s second Polydor album, 1982’s excellent, super-funky ‘The Early Tapes,’ actually pre-dated their debut platter; originally titled ‘Strategy,’ it was co-produced by Andy Sojka for his Elite label in 1980 but only got so far as the test pressing stage as the band signed to Polydor shortly afterwards and the major label purchased the recording. Its highlights, besides the group’s debut single, ‘Love Meeting Love,’ include the Latin-flavoured, disco-friendly ‘Wings Of Love,’ the energetic vocal-less funk groove, ‘Sandstorm’ and ‘Woman,’ featuring Boon Gould blowing some mellifluous alto sax lines.

‘The Pursuit Of Accidents’ reflected the group’s transformation from thoroughbred jazz-funkateers into a cultured fusion-esque pop group with an adroit ability to well-crafted storytelling songs. The killer cut was the infectious single, ‘The Chinese Way,’ which made the Top 30 in January 1983 and became the band’s most successful at that point.

With their next album, ‘Standing In The Light,’ released later the same year, Level 42 made that all-important big commercial breakthrough and put the funk-infused single ‘The Sun Goes Down (Living It Up)’ into the UK Top 10. It helped to propel the parent album (which was partly produced by Earth, Wind & Fire’s Larry Dunn and Verdine White) into the Top 10 and gave the band their first gold record.

Though the band’s trajectory seemed to be an upward one, inexplicably, their next album, 1984’s ‘True Colours’ couldn’t replicate ‘Standing In The Light’s’ Top 10 status and also failed to spawn a substantial hit; of three 45s taken from the LP, the most successful was the chugging ‘Hot Water,’ a fan favourite though it only just crept in the Top 20. (Even so, the group’s musical growth as purveyors of danceable sophisto-pop continued in the second half of the ’80s).

Chronologically, the box set’s story ends at this point but there are still five CDs of goodies to wade through. The discs containing 12″ mixes are particularly rewarding; the standouts include an effects-heavy, super-funky “Specially Remixed” version of ‘Micro Kid’  and Shepp Pettibone’s radical extended mix of ‘Chinese Way’ (the Dub Edit of the same cut is one of several cuts making their way onto CD for the first time). A disc of bonus material includes several dynamic live recordings.

Packed with detailed and illuminating liner notes that include quotes and reminiscences from both current and erstwhile members of the band, this retrospective will be on the wanted list of both Level 42 diehards and devotees of 80s music. And for them, no doubt, Volume 2 can’t come soon enough.

The album is available from March 26th.