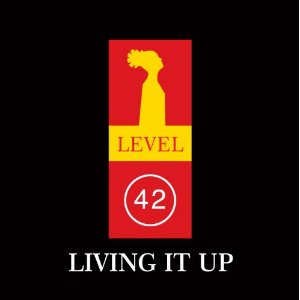 Level 42 were one of those bands that were too ‘white’ for some soul boys and too ‘black’ for the sensibilities of some pop fans. While those blinkered value judgements may have hampered their credibility in certain musical circles, ultimately, it didn’t do much to impede their commercial viability and the Isle of Wight-based quartet racked up a pile of UK chart hits (29 in all) between 1980 and 1994.

To celebrate the band’s 30th anniversary, Universal have released ‘Living It Up,’ a 4-CD box set that comprises all the group’s 34 singles (A-sides only), beginning with their debut 45, a instrumental called ‘Sandstorm’ released on Polydor in 1980. Though it didn’t make the charts, their next record, ‘Love Meeting Love,’ did and kicked off a fertile fourteen-year period of hit records and touring.

What’s striking about this collection is not only how well-crafted the group’s material was but also how well it has stood the test of time. Though propelled by singer Mark King’s locomotive bass lines, the group didn’t rely – like a lot of jazz-funk acts – on open-ended and sometimes interminable funky jams for the core of their material. They knew how to structure songs and how to build and release tension in their music. Though they were initially associated with the burgeoning and nascent Brit funk movement (thanks to the involvement of their first producer, Andy Sojka), Level 42 rapidly ascended out of the jazz-funk ghetto and established themselves as a bona fide pop act. Even so, there was still a good deal of funk and soul in their sound, which was distinctive as much for Mark King’s vocals as his trademark slapped bass.

Highlights on this set include the poignant ‘Leaving Me Now’ (featuring keyboardist Mike Lindup’s memorable acoustic piano coda), ‘The Sun Goes Down (Living It Up),’  ‘Something About You’ and ‘Lessons In Love.’ There are plenty of collectable tracks too, among them Shep Pettibone’s remix of ‘World Machine’ for the US market plus a host of previously unissued studio material on CD3 (including band demos). CD4 is devoted to newly-recorded acoustic versions of some of the band’s best known tunes played by King and Lindup and the stripped-down arrangements reaffirm how strong and durable some of their songs are.

Complementing the music is an informative booklet, featuring reminiscences from Mark King, and Earth Wind & Fire’s Verdine White (who co-produced Level 42’s ‘Standing In The Light’ album) plus liner notes by journalist, Paolo Hewitt. It’s a great package for devotees of the band and a tantalisingly taster for the group’s UK tour dates, which begin this coming August and October.