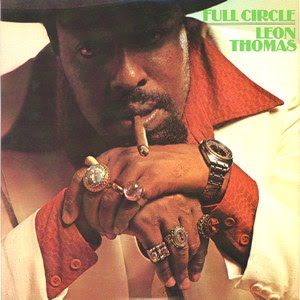 For a time in the 70s St Louis–born Leon Thomas was one of the most acclaimed jazz singers of his generation. He’d been turned onto jazz after seeing Miles Davis and John Coltrane and, after moving to New York , he found a gig with the Count Basie Band. After his time in the army, Thomas worked with Pharaoh Sanders – helping him craft his ‘Spiritual Music”. The Sanders connection got him a solo deal with Bob Thiele’s Flying Dutchman label and his first two (largely experimental) long players earned him a reputation as a cutting-edge jazzer. Thiele, though, felt that Thomas had the potential to cross over to a more lucrative mainstream audience and his 1971 album ‘Blues And The Soulful Truth’ almost achieved that. The album attracted lots of attention – most notably from Carlos Santana who was looking to extend the jazz appeal of his group and he did a deal to work with Thomas to that end. As reciprocation, Thiele had Santana work with Thomas on his fourth album – ‘Full Circle’, reissued here by BGP/Ace.

Santana offered one of his songs to Thomas for the set – ‘Just In Time To See The Sun’, a lively Latin romp that harked back to Thomas’ early work. Thiele, though, was looking for his man to deliver more accessible tunes. Thomas obliged with covers of ‘I Wanna Be Where You Are’, ‘Got To Be There’, ‘You Are The Sunshine Of My Life’ and ‘Never Let You Go’. All are sweet and smooth; respectful and relaxed. If you love the kind of thing Billy Eckstine did at Motown and Stax you’ll love these cuts.

The percussive, jangling ‘Balance Of Life’ and the lengthy ‘Just In Time To See The Sun’ are much more experimental while the opening cover of BB King’s ‘Sweet Little Angel’ harks back to Thomas’s big band days.

The album didn’t quite break Leon Thomas so he quit Flying Dutchman and went on the road with Santana. After that his career stalled before a brief reunion with Thiele in 1988 at CBS. That meant little but by the time of his death in 1999 the singer had built up a cult reputation; this album was one of the contributory factors.