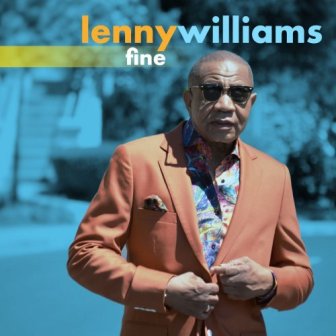 It was I think August 2018 when the soul world got excited by the news of an upcoming Lenny Williams’ album. Anything from the one time Tower Of Power lead singer and purveyor of his own classics like ‘Cause I Love You’, ‘Choosing You’, ‘You Got Me Running’ and the bonkers but ever lovely ‘Shoo Doo Fu Fu Ooh’  is always welcome. News of the album came via the single, ‘Fine’ – a kind of sweet, steppers groove that celebrated a lengthy but always “fine” relationship. Produced by Levi Seacer, Jr. (sometime collaborator with Prince and Sounds of Blackness), it was a great appetiser. Well it’s been almost two years since that but, at last, the album, named for that track is with us!

The good news is that ‘Fine’ still sounds fine and amongst the other 15 tracks there’s plenty more classy, good ‘ole soul music. Chief amongst them is ‘Southern Girl’ – a wonderful old school, Malaco-sounding tribute groove to the girls south of the Mason-Dixon Line. ‘Dance With Me’ is another potential focus cut. Yes, it is a dancer…crisp and tight with more of that old school southern soul charm.

The promoted single at the moment is ‘Say So’. This one’s a piano-led, dramatic building ballad. For my money, though, the lusher ‘You Been Good To Me’ would have been a better bet if Lenny and his people were looking for an attention grabbing ballad. It totally befits his 75 years and so much better than some of the other tackier ballads like ‘Old School Loving’. I think an experienced icon like Mr Williams is better than lyrics like “tonight the bed’s gonna rock!” Equally it might have been better if Lenny passed on trying to deliver contemporary R&B (things like ‘The Greatest Gift Is You’) and focused on what he does best… the sound of the old school, like the finger-clicking  lovely ‘Grateful’.

There’s a really good soul album lurking amongst the 15 tracks of ‘Fine’. Tighter editing, stricter quality control and dropping  three of four tracks would have made ‘Fine’ really fine!