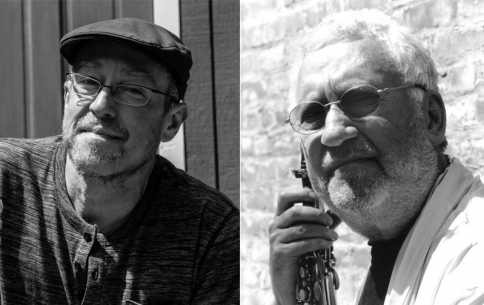 At 87, jazz giant Lee Konitz is evidently still young at heart, judging from some of the droll jokes that he cracked in between songs. “We’re going to do one more song and then we’re all going to get drunk,” quipped the legendary saxophone maestro in a dry, matter-of-fact delivery that amused an enthusiastic Town Hall audience. By contrast Dave Douglas – 35 years Konitz’s junior – was more taciturn and played something of a foil and sidekick to the effervescent and loquacious saxophonist, who mostly played from the comfort of a chair. The dynamic duo were accompanied by some stellar musicians; Danish guitarist and ECM recording artist, Jakob Bro; Malaysian-born bassist Linda Oh and Spanish drummer, ex-Brad Mehldau trio member, Jorge Rossy. Mostly the quintet played jazz standards while adhering to an urbane chamber jazz aesthetic.

They began with ‘All The Things That You Are,’ which showcased the cool and mellow contrapuntal interplay between Konitz and trumpeter Douglas. The latter subdued his normal flamboyance, playing in a controlled, elegant way that complemented Konitz’s mellifluous melodic outpourings. As well as playing his trademark alto sax, Konitz also improvised wordless vocal melodies over the music. Significantly, he also referenced his own musical history by the inclusion of ‘317 East 32nd Street’ by the great pianist Lennie Tristano, who was Konitz’s mentor way back in the 1940s. The quintet also gave a delightful rendition of the ballad ‘Lover Man,’ before capping off the evening with a sweetly-satisfying version of the old jazz chestnut, ‘Stella By Starlight.’ Understandably, the group received a standing ovation, especially for the remarkable performance of Lee Konitz, a living legend who musically has never been content to sit still and, as this performance demonstrates, continues to inspire young jazz musicians.