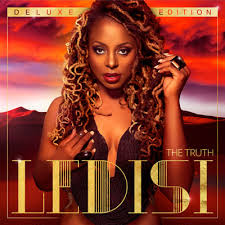 ‘The Truth’ is Ledisi Young’s seventh studio album and if we’re to believe the PR blurb that comes with the release, then the 13 tracker is the musical manifestation of the pain and recriminations that followed the end of her last major romantic liaison.

The end of the affair is chronicled in the cleverly named, dramatic ’88 Boxes’. It’s a wonderful, proper soul song. In it Ms Young sobs that she’s still “in love with what used to be” but now all she has are 88 boxes – they contain what’s left of her life. It’s a graphic picture of the practical reality of a break up. I doubt you’ll hear a more searing soul song this year; it’s as desperate as Gregory Porter’s ‘Water Under Bridges’. The equally excellent ‘Like This’ illustrates a relationship on the verge of collapse and the desperation of one of the couple (Leidsi) who’s trying to salvage something. The album’s title track graphically reveals the pain of discovering things aren’t what they should be: “Like a hurricane and without warning, it hit me Sunday morning. I had to face the truth.” Painful stuff and a perfect illustration of the dichotomy at the heart of real soul music… how something ostensibly so painful can at the same time be so beautiful.

The album’s not all doom and gloom though. The opening salvo (the relationship at its peak) is joyous and upbeat. The set’s first cut, ‘Blame You’, is a great, clipped-beat dancer (perfect for the modern room). It’s a great snapshot of the transforming power of human love. ‘Rock With You’ (no, not the Jacko song) is another great dancer while ‘That Good Good’ is a contemporary R&B rump shaker that would give Beyonce a run for her fish nets. They’re followed by the sensual lurve ballad, ‘Lose Control’… perfect for radio stations brave enough to push the Quiet Storm format. Ledisi could invite me to lose control at any time… but I’ve never been that lucky.

Elsewhere Ledisi explores how to get over the pain, the possibility of quick fixes and when and how the doubts started. Like everything else, it’s all delivered with that remarkable, toe-curling, true soul voice that’s made Ledisi a favourite with Michelle Obama – a woman of consummate taste. Sadly the First Lady doesn’t represent the mainstream but maybe with some luck and the help of adventurous radio programmers, ‘The Truth’ might just be Ledisi’s breakout album.