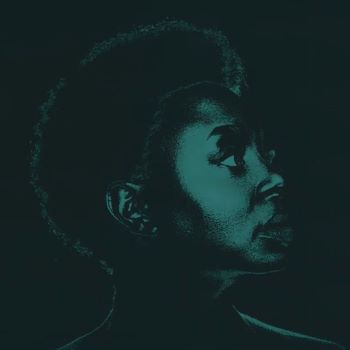 Indie soul heroine LEDISI is revered by the contemporary soul crowd, but I wonder just how many of her disciples realise that she, herself, is a disciple of Nina Simone. Indeed Ledisi freely admits that Ms Simone, whom she refers to as her “shero”, was a key influence in her decision to pursue a musical career. Over the years she’s crystallised her admiration for and debt to Nina by producing and touring tribute shows, so it was always on the cards that one day she would record an album testifying to her respect for the legendary diva.

For the past few years or so Ms Young has been recording Simone songs and storing them away till she felt the time was right to assemble them into an album. The pandemic and subsequent lockdowns  finally gave Ledisi the time and opportunity to bring the project to a conclusion and the concise 7 tracker that is ‘Ledisi Sings Nina’ has just won release on her own label.

The album is the New Orleans-born singer’s tenth long player and the  seven songs have been carefully curated. Ledisi  believes the chosen songs are of social and personal import,  none more so than the poignant ‘Four Women’ (with guest cameos from Lisa Fisher, Lizz Wright and Alice Smith). It’s powerful and dramatic and sets the tone  for much of the long player with  cuts like Jaques Brel’s ‘Ne Me Quitte Pas’, the live version of ‘Wild Is The Wind’ and the opening ‘Feeling Good’ keeping the drama quotient on a high.

The jaunty take on ’My Baby Just Cares For’ adds some light to the shade while the version of Natt Adderley/Oscar Brown Jr’s ‘Work Song’  allows Ledisi to take vocal flight over a big soundscape crafted by producer Jules Buckley and the Metropole Orkest. Amongst the other producers are Rex Rideout, Gregg Field and Adonis Rose. Despite the variety of producers, ‘Ledisi Sings Nina’ is a unified whole – unified by two factors – the singer’s powerful, committed  and soulful delivery and the inherent respect and admiration for Ms Simone.