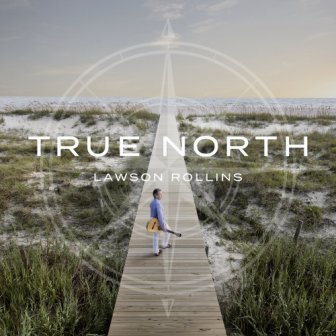 Lawson Rollins is an American smooth jazz acoustic guitarist whose music has often echoed his passion for travel. Many jazz guitar fans will have fond memories of his ‘Traveler’ album – a set that gave listeners a flavour of the places that Rollins has visited – as a “traveller” rather than a tourist. Since then Lawson has continued to travel and use those experiences in his music. More recently however, he’s dabbled with film music. First there was the album ‘Dark Matters: Music For Film’ followed by his score for the feature movie ‘Stay Out Stay Alive’. Lawson says that working with film has expanded his horizons and brought a different kind of discipline to how he now works. That, he adds, is why ‘True North’ is a little different to his earlier work.

Lawson Rollins fans needn’t worry though. The differences are subtle. The album still delivers the guitarist’s crystalline yet delicate signature guitar sound. The different shadings are maybe most apparent on the album’s title track which opens proceedings. Midway through there are electric guitar flourishes complementing the earlier (and later) acoustic work while ‘With The Wind’ and ‘Dead Ahead’ are noteworthy too for their immediacy, (slightly) tougher textures and tight focus on the main melody. Rollins’ guitar virtuosity is most apparent on the evocative ‘Bluewave Bossanova’ which though thoroughly contemporary harks back to the golden age of acoustic jazz guitar.

‘True North’ is the first full album that Lawson has produced himself and though he may argue that it is a different animal to his earlier work; in essence it isn’t. Fans will delight in it as it cements his standing in Guitar Player magazine’s “Transcendent Acoustic Guitar Players” listing.