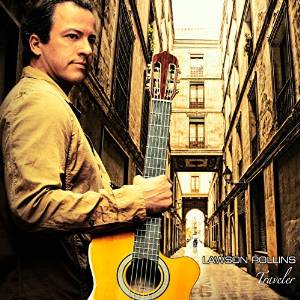 Lawson Rollins is an American smooth jazz guitarist and ‘Full Circle’ is his fourth solo album. His preferred instrument is the acoustic guitar and by extension, therefore, his music has a distinct Latin feel… but listen in and you’ll hear there’s much more to the Rollins’ sound.

The LP’s lead single is a good example of what the guitarist’s about. ‘Momentum’ rides in on a strong rumba-inspired groove and there are plenty of Spanish influenced flourishes that could take you to the historic quarters of Granada or Seville. But it all sits on a subtle marching motion while there’s a hint of the Far East (Japan?) about it too. And that’s the story of the music herein. Expect the unexpected as Rollins mixes Middle Eastern exotica, tango, reggae, classical, world beats and more with his trademark Latin flavours. So, serving as examples, the pacey ‘Pursuit’ yes, is Latino but the main motif is taken from Appalachian fiddle music while ‘Shifting Seasons’ melds American folk tunes with Asian flavours – all underpinned with a bolero rhythm.

‘Gone From Here’ is another cut that throws up a surprise. The almost nine minute “journey tune” sees Rollins take to the electric guitar – transforming what begins as a gentle Latin piece into a rock stroll.

Throughout, Rollins is supported by the same group of side men – Dominic Camardella (keys), Dave Bryant (drums), Randy Tico (bass), Richard Hardy (reeds) and Charlie Bisharat and Cameron Stone (strings) and they bring a unity to the complex proceedings. Find out more about the album @ www.LawsonRollins.com