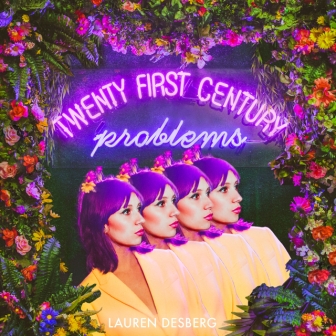 Harlem-based Lauren Desberg is just 23 but she’s already making waves on the US jazz circuit. Born and raised in LA with a musical family, she “got into jazz” at an early age and her talents and passion for the genre won her a place at Boston’s famed Berklee College of Music. While still at college she made her recording debut with an EP, ‘Sideways’ and now she follows that up with her first full solo album… and you can maybe guess from the title where Ms Desberg is coming from.

Yes, that’s right … her mission statement is to “bring jazz into the 21st century” and to that end here she’s created a music that pays homage to jazz’s roots but she delivers it in an unusual, sometimes experimental, but always contemporary way. I guess her approach is best summed up by the disembodied voice that fronts up the second track, ‘He Loves And She Loves’. “Is there a possibility of creating a kind of synthesis of jazz and the more popular forms of music?” asks the anonymous narrator and what follows is a gentle, poppy swayer of a tune that’s lifted by some heavy jazz piano and disengaged horn work building to a tense ending. That’s followed by another juxtaposition. ‘Lie To Me’ has many elements of the classic torch songs from the “great American songbook” but the bass-heavy introduction adds an element of the sinister.

Most immediate cut on the album (because of its familiarity, of course) is a cover of the Bee Gee’s ‘How Deep Is Your Love’. Ms Desebrg’s treatment builds from a quite start into a imaginative, crashing reading that retains the best of the melody. The beats are a whole lot bumpier on ‘Down With Love’… almost a Carmen Miranda style Latin romp, but not quite. And that’s the essence of the music on ’21st Century Problems’. Each track defies easy pigeon-holing; when you think things are going one way, they go off in another… tangent music, if you would; and yes, music for the 21st century.