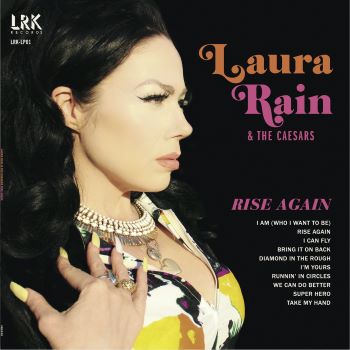 Like those proverbial London buses, these days great soul albums seem to come along in twos! Hot on the tail pipe of Mamas Gun’s ‘Cure The Jones’ ( see our review) comes an excellent ‘Rise Again’ from LAURA RAIN and the CAESARS. The Detroit-based band (essentially husband and wife team – guitarist George Friend and vocalist Laura Rain) are long-term friends of this web site. We’ve been tracking their take on Detroit soul since 2016 when they released the satisfying long player, ‘Walk With Me’. Since then their music has grown in stature and soulfulness and, importantly, they refused to let the various pandemic lockdowns hold them back. Indeed they used that time profitably – releasing a series of singles which they called a “Soul Journey”. That journey climaxed  in the still beautiful  ‘Closer To The Win’ – a sweet and soulful  ballad with a vintage Philly feel that topped all the credible soul charts and sold out in just ays when released on 7” vinyl by UK based LRK Records.

And it’s reliable LRK Records that’s the source of Laura’s brand new album, ‘Rise Again’. The release was heralded by two fine singles… ‘I Am’ and ‘Rise Again’ itself. The former was/is an up-tempo mover with a classic Northern/Motown soul feel and Laura belts it out with all the conviction that we’ve already come to expect from her. Lyrically it’s no throwaway;  the song is a declaration of self-independence and a celebration of everyone’s unique identity. ‘Rise Again’ was a slower, soulful  outing – an organ-led, old school builder.

Those two tunes get the ‘Rise Again’ album off to a flying start and the remaining eight tracks yield plenty more soul gems. ‘I Can Fly’ is a powerful, mid-tempo groove; ‘Diamond In The Rough’ has a Southern soul flavour; ‘Runnin’ In Circles’ and ‘Super Hero are both insistent; while the closing ‘Take My Hand’ is a dramatic ballad.

That leaves a trio of tracks thar are outstanding by any yardstick. First up there’s the lithe, Latin-flavoured ‘We Can Do Better’, then try ‘I’m Yours’ – one of the sweetest little soul tunes you’ll hear this year. Finally there’s the wonderful ‘Bring It On Back’ another showcase for Ms Rain’s unique and powerful melismatic voice and George’s sympathetic production – this one could prove to be Laura’s next ‘Closer to the Win’.

And speaking of ‘Closer’, non-vinyl versions of ‘Rise Again’ offer that classic along with four other previously released singles as “bonus” tracks.

The ‘Rise Again’ album is released on April 8th on limited edition vinyl. It’s also available on CD and digitally.