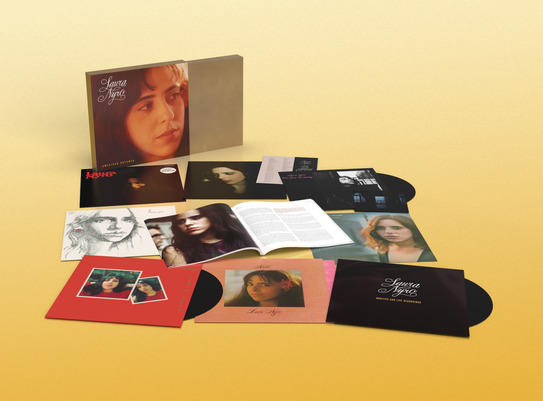 Laura Nyro peaked early. The Bronx-born singer/songwriter was eight months shy of her twentieth birthday  when she lit up the pop firmament like a supernova in February 1967 with the release of her landmark debut album, ‘More Than A Discovery.’ Four years later, though, exhausted by the travails of the music business, she withdrew from the unremitting glare of the spotlight to get married and embrace rural tranquillity far removed from the hustle and bustle of New York’s mean streets. It took another four years for Nyro to feel confident enough to return to what she was born for but by then music – and the music business – had changed beyond recognition. Both phases in Nyro’s career are covered in ‘American Dreamer,’ a breathtaking 8-LP box set that spans the years 1967 to 1978; it features seven studio albums plus a bonus disc of rarities and comes housed in an impressive package that includes a photo-packed booklet featuring an eloquent account of Nyro’s life and career penned by writer, Peter Doggett.

Female singer/songwriters are a common part of the pop music scenery today – and have been for many years – but when Laura Nyro debuted in 1967, there were no other women performers like her who sang, played the piano and wrote all their own material. Her first album, a one-off release on the Verve/Folkways label called ‘More Than A Discovery’ lived up to its title; it was a stunning showcase that revealed how Nyro had taken a welter of different influences – from folk and jazz to Brill Building pop, Broadway show tunes and soul – and distilled them into a distinct individualistic style. The album, which became part of Columbia’s catalogue in 1973 when it was re-titled ‘The First Songs’ –  included four of her most famous tunes, all hits for other acts;  ‘And When I Die’ (recorded by both Peter, Paul & Mary and Blood, Sweat & Tears), ‘Wedding Bell Blues’ and ‘Blowin’ Away’ (both big hits of The 5th Dimension) and the magnificent ‘Stoney End,’ a hit for Barbra Streisand.

Clive Davis at Columbia Records persuaded Nyro to jump ship from Verve and in 1968, she delivered the album that many consider her masterpiece: ‘Eli And The 13th Confession,’ which The 5th Dimension again plundered for hits, taking the trippy ‘Stoned Soul Picnic’ and driving, gospel-fuelled ‘Sweet Blindness’ into the US charts. The album also contained the piano-driven Motown-inspired ‘Eli’s Comin’,’ whose dramatic changes of tempi (from slow to fast to slow again) was one of Nyro’s indelible hallmarks.

1969’s ‘New York Tendaberry’ was darker, deeper and more intimate; consisting mostly of vocals with bare piano accompaniment, it found Nyro focusing on the vicissitudes of love and romance. At times the music is austere, though at other times a few telling orchestrated backdrops add colour, contrast and enhance the emotional heft of Nyro’s performances. The key track is arguably the uplifting ‘Save The Country,’ a gospel-tinged tune with insistent brass fanfares that was purportedly inspired by the assassination of Robert Kennedy in 1968; though Nyro released it as a single, it was The 5th Dimension who took the song into the charts.

Her fourth LP, ‘Christmas & The Beads Of Sweat’ from 1970, was less dark than its predecessor, but still had moments of intensity, albeit attired in the raiment of pop, soul and rock, which were beautifully tailored into a singular sonic suit. Unusually, besides featuring ace original songs like ‘Blackpatch’ and ‘Beads Of Sweat,’ Nyro included a fabulous cover version of Gerry Goffin and Carole King’s ‘Up On The Roof,’ which had been a hit for The Drifters in 1962.

Just at the point where Laura Nyro was being feted as one of America’s principal pop/rock songwriters, she surprised the public by serving up an album of cover versions: ‘Gonna Take A Miracle,’ which put her in Philadelphia’s Sigma Sound studio with vocal trio LaBelle (Patti LaBelle, Nona Hendryx and Sarah Dash) and Messrs Gamble & Huff at the production helm. What wasn’t a surprise, though, was Nyro’s love for R&B and soul music, which had been clearly apparent in her previous albums. The set opens with a wonderful acapella take on The Shirelles ‘I Met Him On A Sunday’  and includes a barnstorming version of Martha & The Vandellas ‘Jimmy Mack’ and a cover of The Royalettes’ elegant ballad, ‘Gonna Take A Miracle. ‘

After ‘Gonna Take A Miracle,’ Nyro got hitched and left New York for rural Connecticut. She turned her back on the music business for five years, returning in 1976 with the comeback album ‘Smile.’ By then, she was surrounding herself with the cream of the New York session fraternity, many of whom were jazz musicians – like bassist Richard Davis, guitarist Joe Beck, and the Brecker brothers, saxophonist Michael and trumpeter, Randy. As a result, the music was much slicker than her earlier LPs – with shades of Joni Mitchell and Phoebe Snow in places – but no less engaging; and her penchant for dramatic shifts in tempo within songs persisted, as the protest track ‘Money’ showed. Other highlights included the passionate ‘Stormy Love,’ the Chinese-themed ‘Children Of The Junks,’  and the jazz-tinged ode to loneliness, ‘I Am The Blues,’ where Nyro’s voice is counterpointed by Randy Brecker’s shimmering trumpet figures.

Nyro followed up ‘Smile’ with a live album, ‘Season Of Lights’ (not included in the box set ) before she unveiled her final Columbia studio album, ‘Nested’ in 1978. At the time, Nyro – who alternates between piano, organ and guitar – was pregnant with her first child and her sense of impending maternity and domestic bliss is implicit in the album’s title and explored by some of its themes. Stylistically, it’s less jazz-inflected than ‘Smile’ (there are no horns) but lacks the passionate intensity of her late ’60s albums; perhaps because of that, the album wasn’t a commercial success and remains overlooked in Nyro’s canon; but its combination of emotional restraint and rumination shows us another side of the singer.  The song ‘American Dreamer,’ which gives the box set its title, is a wry autobiographical reflection where Nyro muses on the dubious business practices of the music business while the excellent ‘Mr Blue (The Song Of Communications) ‘ explores the problems inherent in rekindling a former romantic relationship.

The final LP in the box set is devoted to Nyro rarities and live recordings. All of them have been available elsewhere before but have never appeared together on vinyl. Among the rarities are six demo recordings, including a sublime piano and voice rendition of the classic ‘Stoned Soul Picnic.’ Four of the five live tracks on offer capture Nyro at Fillmore East in 1971 performing covers of the soul hits ‘Ain’t Nothing Like The Real Thing,’ ‘(You Make Me Feel Like) A Natural Woman,’ and the Five Stairsteps ‘O-o-h Child.’  There are also single versions of ‘Stoney End’ and ‘Save The Country’ that are different from the album versions; ‘Stoney End’ features a re-recorded vocal and different lyrics (omitting the line about the “good book Jesus,” which her record company deemed contentious at the time) while ‘Save The Country’ was given a  stylish pop-style makeover by producer Bones Howe.

‘American Dreamer’ doesn’t tell us all of Laura Nyro’s story but it gives us the most compelling chapters of a life that was cruelly cut short by cancer in 1997. Presented in a deluxe package that includes an eloquent analysis of her career by British writer Pete Doggett, the box set serves as a monument to a genuine pioneer who blazed a trail for other female singer-songwriters.