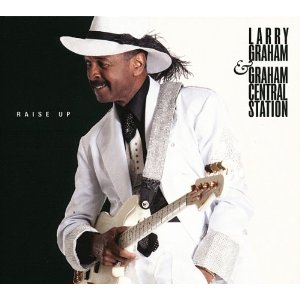 Larry Graham has an unimpeachable funk pedigree. An original member of lysergic pop/funk/soul aggregation, Sly & The Family Stone, in the late-’60s – where he patented his signature slapped bass style – he led his own successful R&B group, Graham Central Station, in the ’70s as well as scoring big hits – such as the chart-topping US smash ‘One In A Million You’ – under his own name. After a lengthy hiatus away from the recording scene, Graham is back with a dynamic new album that should please those who are devotees of his much-vaunted earlier work. Significantly, he’s also rebooted Graham Central Station, the band that served him well during the ’70s (though he leads a brand new incarnation of the group comprising five fresh recruits).

Graham hasn’t forgotten how to funk. He and his cohorts lay down some potent grooves during the first half of the 13-track album, including the buoyant rump-shaker, ‘Throw-N-Down The Funk,’ and a fresh, zesty, take on GCS’s classic ‘It’s Alright.’ Graham’s rich, resonant baritone voice – as distinctive and uniquely identifiable as his bass guitar sound – gets a chance to shine on the anthemic message song, ‘Raise Up,’ which mines a slower, deeper groove. It features a telling cameo from Prince (on guitar, drums and keys) who also guests on two other cuts – a blues-drenched slow ballad called ‘Shoulda Woulda Coulda,’ and the furiously funky ‘Movin’.’

Graham also revamps a couple of other vintage GCS cuts – ‘It Ain’t No Fun To Me,’ and ‘Now Do U Wanta Dance’ – as well as providing a souped-up take on Stevie Wonder’s classic ‘Higher Ground’ (with GCS’s female singer Ashling Cole handling vocals). The mid-tempo ballad ‘No Way’ also offers an opportunity for Graham to flex his vocal muscles, though the song morphs into a chunk of throw-down greasy funk halfway through. More sedate is the slow love song, ‘Hold You Close.’ It’s a real lighter-waver but perhaps a bit too cloying and sentimental for some tastes.

The album closes with ‘One Day,’ which is graced by the charismatic presence of ex-Tony Toni Toné man, Raphael Saddiq. It rounds off an album that is reassuringly solid rather than mind-blowingly spectacular. Even so, it contains some tasty R&B grooves and proves that when it comes to funk, 66-year-old Larry Graham has still got what it takes.