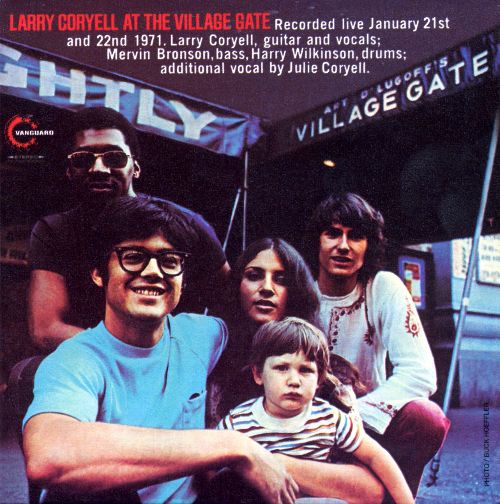 The late Larry Coryell was a leading light in the birth and evolution of jazz-rock guitar in the late 1960s and early ’70s and was a hugely influential figure (among those that fell under his spell included Return To Forever guitarist, Al Di Meola). He had risen to fame replacing Gabor Szabo in drummer Chico Hamilton’s band in the mid-’60s and then in the latter part of the same decade appeared on several groundbreaking albums by vibraphonist, Gary Burton, where, favouring distortion over a clear sound, he pioneered a meld of jazz and rock that would become known as fusion.

‘At The Village Gate’ takes us back to the dawn of Coryell’s solo career. It was the Galveston axe meister’s fourth LP, recorded live at famous New York’s jazz venue, and originally released in 1971 on the Vanguard label. It’s been long out-of-print and is now revived by US reissues specialists, Real Gone. It proves to be an enthralling listen, especially for the guitar heads out there. Coryell leads a power trio, comprising Mervin Bronson on bass and Harry Wilkinson on drums (who hadn’t been playing with the guitarist for very long) and as a result the music is spare and stripped-back, allowing Coryell’s guitar to shine.

The first number, ‘The Opening,’ with its use of muscular riffs and a heavy wah-wah sounds very Hendrix-esque and shows how many rising guitar players in both the jazz and rock arenas had fallen under the spell of the flamboyant guitar avatar (Hendrix had died the previous year, in 1970). ‘After Later’ is less visceral than ‘The Opening.’ Though faster, it’s more subtle and is built on a more complex set of riffs and from a perspective of dynamics and texture, offers lots of contrasts of light and shade. But when Coryell solos, the song takes off into another dimension, though the intuitive rhythm section keeps the track firmly anchored.

A driving version of Chick Corea’s ‘Entardecendo en Saudade,’ which is propelled by an ostinato bass part, shows another facet of Coryell’s playing, with its meld of jazz, rock, funk, and shades of psychedelia.

A cover of ex-Cream bassist Jack Bruce’s ‘Can You Follow (Dance On the Green Hill)’ – Coryell played with Bruce in the late-’60s – begins with Harry Wilkinson’s crisp drum patterns before Coryell enunciates a dark, reflective melody. It’s the longest cut on the album and shows the guitarist working in a more exploratory, jazz-tinged vein. Closing the album is a song written by Coryell with his then wife June, who also sings on it as a duet with her husband. It  begins as a ballad with plaintive folk overtones but then after three minutes morphs into a thundering heavy guitar workout riding on a propulsive one-chord vamp where Coryell exhibits his fretboard prowess with dazzling improv.

Sadly, Larry Coryell passed away earlier this year at the age of 73. Though not one of the best known works in his canon of 70 albums, it’s worth investigating as it shows what a magnetic live presence he was early on in his career.