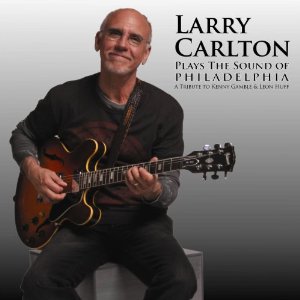 Sometimes you just know when an album is going to be good – and here’s a great example. The credits are the giveaway really… take a top lead name, add a clutch of classic tunes and have them performed by the best players. The recipe usually works and here it sure does. The lead name is the three-time Grammy winning guitarist, Larry Carlton; the tunes are all certified classics from the golden age of Philadelphia soul; and the supporting cast includes Paul Shaffer (organ), Christopher Li’nard Jackson (bass), Andrea Valentini (drums), Mark Douthit (sax), Steve Guttman (trumpet) and Dale Kirkland (trombone). Then there are the two backing vocalists – Charlene Holloway and the redoubtable Carla Benson – who more than likely featured on most of the original recordings of these wonderful tunes.

The girls add tonal colour throughout. Occasionally they just coo beautifully in the background while elsewhere they embellish the tracks by singing the hook line or chorus – as on the great take on ‘Could It be I’m Falling In Love’ and the, yes, predictable quite storm treatment of ‘You Make Me Feel Brand New’. There’s a song that’s been covered dozens of times by all kinds of artists – yet it always works … and that’s part of the reason why this album succeeds so well. All 11 songs were originated by craftsmen who knew how create “proper” songs and as such they can withstand all tests. Witness the treatment of the Spinners’ ‘I’ll Be Around’. It’s taken reverentially. Carlton knows it doesn’t need pyrotechnics to make it work. He just allows it to flow and gives sax man Douthit the chance to shine as he takes the lead lines.

The set boasts two full vocals – ‘Drowning In A Sea Of Love’ and ‘Only The Strong Survive’ both cuts feature Bill LaBounty on lead. He’s a seasoned sessioneer (CV includes work with Patti LaBelle and The Temptations) and here he doesn’t imitate Joe Simon or Jerry Butler but he brings just the right amount of similar lugubriousness to both songs. They are great covers and along with the other 9 tracks are wonderful tributes to the song smiths who created them. The album comes with a DVD which includes the music and tributes to Kenny Gamble and Leon Huff and the whole Philly scene.