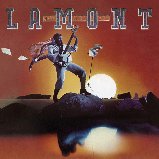 Lamont Johnson was the original bassist with Detroit disco-funk act, Brainstorm, and in 1978, Tabu’s boss, Clarence Avant, was sufficiently impressed with Johnson’s abilities as a musician and songwriter that he signed him for a solo LP. By that time, Johnson had quit Brainstorm over differences regarding the band’s musical direction and recorded ‘Music Of The Sun,’ which is reissued for the first time outside of Japan.

The production was handled by the redoubtable pianist/arranger, Jerry Peters, who was able to bring in A-List session players Lee Ritenour, Ronnie Foster and Chuck Findley to augment Johnson’s own band, Eulajon. The end result is a collection of slick grooves that isn’t far removed from Brainstorm’s 1977 debut LP, ‘Stormin” (which was helmed by Peters for Tabu). It also includes Johnson’s own version of the dreamy ballad that he co-wrote for Brainstorm’s debut – ‘This Must Be Heaven,’ a track that the bass player provided baritone vocals for and which he recreated with a different arrangement for his solo album. Elsewhere, the album delivers some tight dance floor grooves, exemplified by the punchy ‘In With This Song,’ and the buoyant opener, a slice of strutting funk called ‘Sister Fine.’ In a similar vein is ‘Yours Truly, Discreetly,’ a funkafied, brassy dancer that showcases Johnson’s bass and vocals.

Jerry Peters shows off his arranging skills on the ethereal, jazz-inflected ‘Music Of The Sun,’ a sumptuous song – and the best cut on the album – which is reminiscent of the material that Peters scored for singer Sharon Ridley for her ’78 Tabu LP, ‘Full Moon’ (which incidentally, is due for reissue soon via Demon). There’s also a striking cover of Goffin/King’s ‘Hey Girl’ that showcases Johnson’s mellow pipes and features female vocals from Renae Williams. Though long forgotten, Lamont Johnson’s solitary Tabu album (another was recorded for the label but has never been issued) is certainly worth a listen, if only for Jerry Peters’ glistening production values.