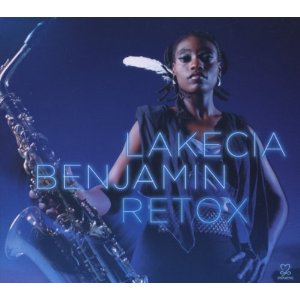 Lakecia Benjamin is New York native. Raised in the Washington heights district, she learned saxophone at Fiorello LaGuardia High School For Performing Arts. From there her career trajectory was rapid – playing in the road bands of Stevie Wonder, Alicia Keys, Macy Gray, The Roots and dear old Anita Baker. On record she’s worked with The Clark Terry Big Band, Krystle Warren and Talib Kweli amongst others… oh, and she played at Barack Obama’s inaugural ball. So it was only a matter of time before she recorded her own solo set – et voila, here it is… a very varied and unusual 12 tracker on the same label that gave us Gregory Porter.

The most important word in that sentence is “unusual”, because, you see, several of the tracks on ‘Retox’ don’t feature Lakecia’s sax playing. What the young player’s attempted to do here is to spotlight her abilities as a composer and producer and yes, her sax playing figures prominently but she also allows other “name” artists to share the recording spotlight with her. ‘Retox’ then is a real team effort and that effort brings most rewards on the wonderful ‘Smile’. In the notes Ms. Benjamin almost dismisses the song as “boudoir soul” but when the modern soul crew get hold of it, it will fly. With vocals from Maya Azucena, the tune’s a delight from start to finish. The melody’s sweet, the beats are infectious – tight and mid-tempo while the lush, balmy horn charts enhance the soul of Azucena’s vocal. Need a cherry on the top? Well, there’s a fabulous old school, alto sax solo from Benjamin… a wonderful, wonderful tune!

Nothing else on the album comes near it. ‘My Love’ and ‘Share My Life” are two of the non-sax tracks and on them, Lakecia has attempted to let the vocals carry the song. But ‘My Love’ (Krystle Warren on vocal) is over-mournful and doesn’t quite hit the spot. ‘Share’ is a better bet. It’s ethereal in the way that much of Minnie Riperton’s work was and features a decent rap from the wonderfully named Whosane. Other featured vocalists on the album include Amp Fiddler (who works hard on the old soul groove that is ‘Keep Talking’) and China Blac who brings a poppy feel to ‘Jump And Shout’.

Then there are the instrumentals. Most are pastiches of Maceo Parker (indeed one track is simply called ‘Maceo’) though some like the closing ‘Slow Juice’ are over-complicated and experimental. Best of the bunch – because of its provenance – is a cover Stevie Wonder’s ‘Don’t You Worry ‘Bout A Thing’. After a very dramatic opening it develops into a pacey Latin romp but it still doesn’t take the honours away from that sweet and lovely ‘Smile’…