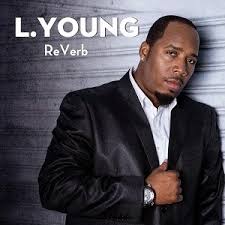 L Young hails from Louisville, Kentucky but now works out of Los Angeles where he’s found work with people like Patti LaBelle, Toni Braxton, Gladys Knight, Malcolm-Jamal Warner and Jermaine Jackson. Currently working on En Vogue’s “comeback” long player, ‘Re Verb’ is his own third solo album and it bears witness to his high profile on the current West Coast R&B/soul scene since it’s bob on the land of La Las current trends

Musically The 11 tracker is totally contemporary and the self-penned songs are right on today’s vibe – both melodically and in lyrical content. Take for example ‘Facetime’ – a broken beat paean to the popular web phenomenon; it’s a great sonic and lyrical snapshot of 2013. With stuttering , electronically generated beats and fast delivery it’ so, so now… and yes it does feature heavy breathing and references to fantasy indulging. But we’re told this is what the people want and Mr Young is happy to deliver. ‘Love Is A Verb’ is another of those stuttering confections but it has lots of charm and is very catchy and might just attract sophisticated, steady dancers, though ‘I Love My Girl’ is probably a better bet in that department.

Ballad-lovers will find plenty to please here with ‘Your Eyes’ probably being the sweetest. In truth things like ‘All The Time’ and ‘Can I Come Home’ are just too dramatic and veer towards R Kelly territory. And in many ways Mr Kelly is a good reference point for Mr Young. Song-wise and vocally, Kelly seems to be the role model though in places you’ll hear traces of Brian McKnight and even Boyz II Men… that’s the kind of album this is.