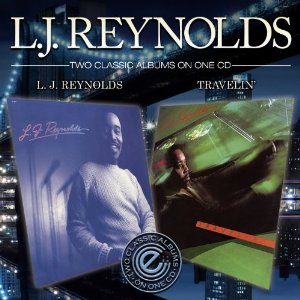 L J (Larry) Reynolds is best known for his stint with Detroit vocal group, The Dramatics. He joined them in 1973 – replacing lead singer William Howard – and stayed till 1980, when Capitol Records offered him a solo contract. The two albums featured on this new Expansion “twofer” were the fruits of that relationship and in fairness the music’s not a lot different to what he created with the Dramatics at ABC and MCA. That’s to say it’s an uptown, soulful mix of crunching dancers and heartfelt ballads with Reynolds’ own overdubbed backing vocals replacing the voices of his erstwhile band mates.

The eponymous ’81 LP is now best remembered for the opening track – a lively ‘Key To The World’. With added “live” effects and some great sax courtesy of Kerry Campbell, it has a feel of Lenny Williams’ ever-lovely ‘Shoo Doo Foo Foo Foo’. No wonder it’s been a long-time favourite on the modern soul scene. ‘Why Do You Do The Things You Do’ and ‘Tell Me’ are more urgent foot tappers while ‘I Love Doing What Makes You Happy’ is tight. Best of the album, though, is a three track middle sequence of Ronnie McNeir songs. ‘Ain’t No Woman Like My Baby’ is a tender ballad; ‘Southern Pearl’ is bold and brassy with a big band swing feel; and ‘Lonely Superstar’ is a dramatic storyline song that sort of mixes the sentiment of ‘The Entertainer’ with some of the melody of ‘Give Your Baby A Standing Ovation’.

The standout on the 1982′ ‘Travelin” LP is a great cover of Aretha’s ‘Call Me’ but the quality is high throughout and the album stands in stark contrast to a lot of contemporary modern soul albums which generally boast , at best, a couple of decent cuts. Back in the day, people like Reynolds (and indeed the backroom staff at labels like Capitol) cared about what they were doing and lavished care, attention and love on each track they cut. Recommended!