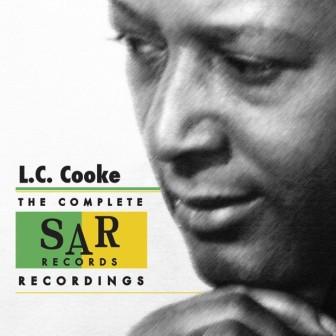 L C Cooke (no one’s ever got to the bottom of the meaning of the initials, though the singer says they mean “loads of charm”) was Sam Cooke’s younger brother and one the first artists to be signed to Sam’s SAR Records.

L C previously had one single out on Checker but when big brother Sam found secular success it was logical that he’d take sweet-voiced L C with him to SAR. Several singles were released on L C and an album was pencilled in for 1964 release but Sam’s murder not only stymied that, but put an end to all SAR activities. Now fifty years later ABKCO Records have rounded up all L C’s SAR Recordings and, through a deal with Ace Records, they’ve now become available in Europe.

Interestingly, we’re told that L C hankered to be a pop star; he says he never was a soul singer. Notwithstanding that, you probably won’t be surprised to know that vocally L C resembles his more famous brother and given that Sam wrote and was in the studio for the recording of most of the 18 tracks here this collection could well be an assemblage of Sam Cooke outtakes. Musically the sound is the sound of ‘Twisting The Night Away’ (on the up-tempo items) and the flavour of ‘You Send Me’ on the ballads. Surely that’s no bad thing? Who could ever have enough of that magical Sam Cooke sound?

It would be foolhardy to cherry pick but despite it’s nonsensical title ‘The Wobble’ has considerable charm… it’s kind of Motown meets Major Lance with a garnish of the Cookes…. vintage soul fans will love it!

Interestingly the late Bobby Womack is guitarist on several of the tracks, while the SAR recordings are augmented by both sides of that Checker single and a 1965 recording (‘Do You Wanna Dance’) for Destination Records. Vintage soul never sounded so good!