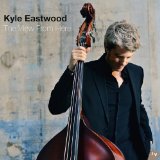 The follow-up to 2011’s excellent ‘Songs From The Château,’ ‘The View From Here’ is composer and bassist Kyle Eastwood’s sixth long player – it’s also his debut for Jazz Village – and illustrates how much he’s grown and matured as a writer and player since his debut back in 1998. It’s a consistently enjoyable work – and judging from its evocative song titles, something of a musical travelogue too – that features strong compositions, tasteful arrangements and exemplary playing. And, as on his previous opus, Eastwood relies on the considerable talents of his high calibre British sidemen – namely saxophonist Graeme Blevins, trumpeter Graeme Flowers, pianist Andrew McCormack, and drummer Martin Kaine, who all achieve a high degree of musical empathy and rapport with the Californian bass player.

As its title intimates, the sultry opener, ‘From Rio To Havana,’ betrays a Latin jazz influence – but it’s more bossa nova than rhumba in style. Riding on a sinuous groove, it features some terrific horn work from tenor saxophonist Graeme Blevins and trumpeter Graeme Flowers, who play the main theme in unison and then break out with inventive solos. By contrast, ‘For M.E.,’ is a doleful ballad with Hispanic overtones while the album’s title track is edgier and more exploratory. So too is ‘Sirocco,’ which is propelled by Eastwood’s driving bass while ‘Luxor’ is stately and atmospheric and its main theme highlights the rich sonorities of the band’s two-horn frontline.

There’s a tangible African vibe to ‘Une Nuit Au Senegal,’ a euphoric rhythmic romp that spotlights Eastwood’s dexterous electric bass work and includes some fine horn soloing. One of Eastwood’s main strengths is his ability to write haunting themes of reflection, which he does on a cinematic-style track called ‘The Promise.’ The sparse ‘Mistral’ is also moody and down-tempo in character and is seasoned with slightly exotic stylistic flavouring. The breezy ‘Summer Gone’ has more rhythmic ebb and flow and the Gallic-themed closer ‘Route De La Buissonne’ – whose title name-checks the French studio the album was recorded in – rides on a subtle funk undertow and grows in intensity as the song progresses. It rounds off what is undoubtedly a solidly satisfying offering from a versatile musician who is now a force to be reckoned with in the jazz world.