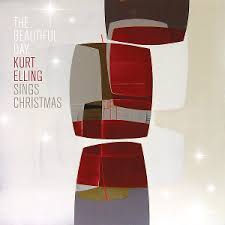 Here’s a Christmas album with a difference – one whose emphasis is secular, perhaps, rather than overtly religious, but which doesn’t sacrifice the spiritual messages that are inherent in many Yuletide-themed songs.  Chicago-born Kurt Elling, whose voice is as pliable, controlled and virtuosic as any horn played by a jazz master, imbues a special magic into this 14-song selection, which ranges from unorthodox renditions of traditional carols (‘Star Of Wonder,’ ‘We Three Kings,’ and ‘Wenceslaus,’ the latter appearing three times as a recurring motif) to evergreen holiday-associated numbers (‘Little Drummer Boy’) and some festive songs that are less well-known (including three tunes by esteemed UK songwriter Leslie Bricusse). Together with his supporting musicians – including guitarist John McLean, keyboardist Stuart Mindeman and drummer, Kendrick Scott – Elling has crafted a set of arrangements and performances that show good taste, skill and musical ingenuity. Their version of ‘We Three Kings’ is particularly striking and seasonally atmospheric with its piano figures glistening like freshly fallen snow. ‘Little Drummer Boy’ is reconfigured into a bebop-esque workout for voice, drums and bass. Elling is at his plaintive, ethereal best on the dreamy winter medley,  ‘The Snow Is Deep On The Ground/Snowfall,’ which is built on a foundation of gentle arpeggios. Those who know and love soul music will delight in Elling’s classy take on Donny Hathaway and Nadine McKinnor’s classic ‘This Christmas,’ which features harmonised horns, a jazzy guitar solo from John McLean and some sumptuous, super-smooth background vocals. It’s the standout cut on an album that avoids the usual Christmas turkeys and clichés and serves up a stylish yet substantial musical feast.