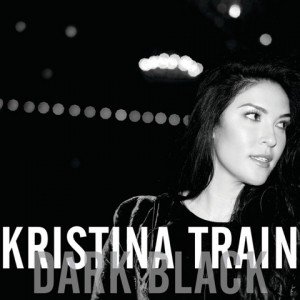 Kristina Train’s career seemed to be seriously derailed after her promising debut album for Blue Note, 2009’s ‘Spilt Milk,’ failed to make the impact that many pundits and music industry insiders had predicted – but the fault lay not with the quality of the New York singer/songwriter’s CD but with Blue Note’s parent company EMI, whose colossal internal problems at that time led to ‘Spilt Milk’ getting lost in the shuffle. Down but not out and determined to get her career back on track, Train exited Blue Note and relocated to the UK – she’d visited here while working on her debut album – and started to amass the material that comprises this keenly-anticipated second album.

‘Dark Black’ is a fabulous, sable-hued, melange of pop, soul, blues, country and jazz. Train – together with her co-writer/producer Martin Craft – adroitly takes all these disparate influences and styles and melds and unifies them into a sound that is familiar and readily accessible but also fresh and new. The haunting title track, a doleful ballad about inconsolable loss and heartbreak, is redolent of the great Dusty Springfield, especially in relation to Train’s ear-catching blend of elegance and soulful restraint in her vocals. By contrast, the wistful ballad ‘Saturdays Are The Greatest’ channels the music of Michel LeGrand and Scott Walker while the pensive ‘Don’t Leave Me Here Alone’ has nuggets of country music in its DNA. Different again is the delicate ballad, ‘Everloving Arms’ – co-written with Simon Aldred – while the more strident and infectious ‘I Wanna Live In LA’ has an overt pop feel.

‘Lonely Sinner’ is arguably the set’s standout song; a bleak confessional about falling from grace that is made compelling by Train’s sonorous, soul-steeped vocals. Indeed, it’s the texture and expressive capability of her voice – together with her skill as a songwriter – that makes this album so deeply captivating. Though it’s essentially a winter-themed album that mostly focuses on the pain of loss it’s also about finding redemption, seeking closure and kick-starting the healing process.

Given its overall mood and focus, ‘Dark Black’ is probably a record whose subject matter Kristina Train will be reluctant to revisit in the future – but in exorcising her demons she has created an absorbing collection of sensitive, well-wrought songs that many listeners will certainly want to revisit again and again.