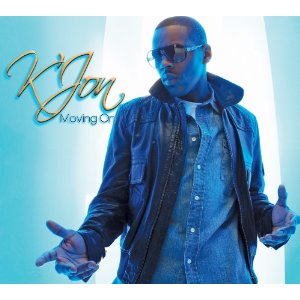 K’Jon debuted in 2009 with the album ‘I Get Around’ from which the single ‘On The Ocean’ enjoyed a record-making run at the top of the US R&B charts. The catchy song was/is a cut above the usual modern soul and R&B fare. Marrying serious issues to heritage soul sounds, the tune became a worldwide modern soul favourite and there were high expectations of more from the young Detroiter. For all kinds of reasons it’s taken almost three years for K’Jon to come up with another album and with the cachet of the reliable Shanachie label behind him, ‘Moving On’ is set to take him to the next stage.

The philosophy behind that attempt to move on to the next stage is explained in the brief title track that opens proceedings – whatever’s gone has gone – no sense in crying; things need to move on. Despite that, what follows actually isn’t too different form K’Jon’s earlier work – (I guess what he’s moving on from are bad business deals… but that’s a different story). So, what we have here is a wide-ranging modern soul/R&B album – some decent ballads, a clutch of mid-tempo shufflers and plenty to move to. Best of the dancers is the vocoder-ed ‘Bad Gurl’. It’s built on stately beats (never frantic) and is right on the modern R&B vibe… though K’Jon, we’re told is also pushing it in the steppers’ market with a whole new line dance constructed around it. ‘The Reason’ and ‘I’m Good Boo’ are two more lovely low key dance items that should please the more mature steppers out there. ‘Superman’ is a whole lot more edgy and tense… interesting lyrics too referencing the contribution that Detroit (his current home base) has made to music.

The album’s first single is the ballad ‘Will You Be There’ – a dramatic comment on the current economic problems and the stress that it creates in families and relationships. ‘My Lil Sister’ is another decent ballad – again in the modern R&B idiom. It’s clear that that’s one of the markets K’Jon’s aiming at. Other cuts, you see, features various guest rappers like Steven The General, Doggie, Jonesy and Mistee Merritt and add to that a sprinkling of spoken interludes (e.g. A request to follow him on Twitter) and we have – as suggested up top – a wide ranging modern soul/R&B album.