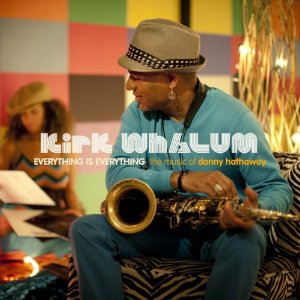 Sax maestro Kirk Whalum’s last album was the third in his gospel trilogy and it seems that this new collection – a tribute to the music of Donny Hathaway – is something of a turnaround. In fact Whalum argues that ‘Everything Is Everything’ is actually a logical extension to his gospel series. The Memphis sax man is a huge Hathaway fan and even those with just a passing knowledge of him will, like Kirk, attest that Donny’s music has a huge spirituality, a deep humanity, an intensity and a vision that puts it on a par with the very best of gospel. Equally, Lalah Hathaway guested on those last Whalum albums so maybe this new recording is evolutionary in the precise terms of the sax man’s musical CV. Whatever, the 11 tracker is a glorious celebration of a sadly-missed talent and to assist in his homage Whalum has used a tight and together core band – John Stoddart (keys), John Roberts (drums), Jeff Lee Johnson (guitars) and Christian McBride (bass). Their sound is augmented by a chamber orchestra and is garnished with cameos from some big names – amongst them Musiq Soulchild, Jeff Golub, Robert Randolph, Rick Braun and Lalah Hathaway herself. Ms H, who usually avoids working on her father’s songs, takes lead on the little-known ‘You Had To Know’. The song was written by Donny for a female group, Cold Blood, back in the 70s and he’d never sung it himself – so Lalah’s perfect reading adds extra poignancy. Most of the other cuts are taken from Donny’s better known material – like ‘Giving Up’, ‘Someday We’ll Al Be Free’, ‘Love, Love, Love’, ‘Valdez In The Country’ and ‘Tryin’ Times’ (featuring some wild pedal steel from Robert Randolph). The LP’s focal point is, I guess, the last track – from which the album is named. It’s basically a combination of three songs – Hathaway’s ‘Voices Inside’, Sly Stone’s ‘In Time’ and Lauryn Hill’s ‘Everything Is Everything’. It’s a big ensemble piece and has all the feel of a gospel celebration –which, of course, brings us back to where we came in. It’s a glorious end to a wonderful celebration of a mighty soul man.