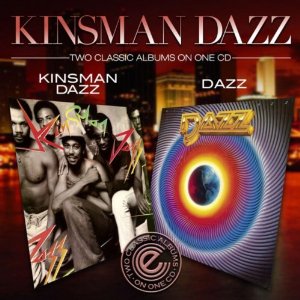 In the 80s Cleveland’s Dazz Band kept the Motown flag flying in dance halls and discotheques the world over. Their sound was classically 80s – crisp, sharp, beaty and brassy with unison (often chanted) vocals floating over tracks that effortlessly mixed light funk and crossover jazz. Musically they could trace their influences back to Earth Wind And Fire and like the great Maurice White ensemble, the music of the Dazz band was always groove-heavy and soul-based. However before they were the Dazz Band, the outfit’s core musicians had all been in an outfit called (awkwardly maybe) Kinsman Dazz.

So, backtrack to 1971 when young Ohio jazz musician, Bobby Harris put together a group called Bell Telephunk. Their music was straight-on jazz. Maybe it was that … or maybe that name, but one thing soon became clear – they were going nowhere fast. The remedy was to merge with another local band – Mother Braintree – to form a brand new unit – Kinsman Dazz. The idea was to fuse the jazz licks of the Telephunkers with the vocals and more user friendly melodies of the Braintree crew. We’re told that the new name – Kinsman Dazz – came from the Kinsman Bar (where the group became the house band) and the fusing of “dance” with “jazz”…whatever, in 1978 the mob got a deal with 20th Century Records.

There they cut two albums – ‘Kinsman Dazz’ and ‘Dazz’. Both are now hugely collectable and so the hugely obliging Expansion Records have licensed them for this “twofer” reissue. Sonically the sound is not a million miles from the Motown sound of the Dazz Band – hardly surprising since both sets were produced by Philip Bailey who used some of his EWF colleagues to flesh out the sound (remember our mention of the EWF influence up top?)

Neither album enjoyed much contemporary success, though one single – the lovely ‘I Might As Well Forget About Loving You’ did become a modest hit and it’s still popular on the two step scene today. The tune stands out here; a lovely EWF pastiche with a gentle soaring vocal that could be Philip Bailey. Other goodies include the gentle ‘Catchin’ Up On Love’, the urgent ‘I Searched Around’ and the brassy ‘Saturday Night’.

With a few personnel changes, the odd electronic gimmick and a couple of tweaks to their soundscape the band dropped the “Kinsman” bit from the name and took the Motown dollar and the rest, of course, is history… but don’t overlook this part of the band’s own history. A great collectors’ album this …