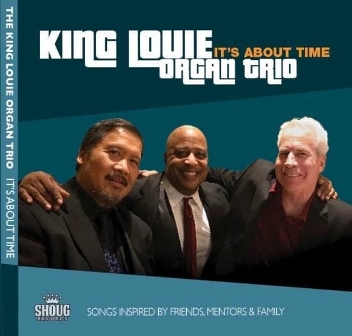 Contemporary jazz fans will know that “King” Louie Pain’ is a modern Hammond B3 maestro- keeping alive the spirit of Jimmy Smith, Jimmy McGriff, Brother Jack McDuff et al. Louie’s been around a while with a number of acclaimed albums under his belt, all celebrating Hammond-led, old school soul, blues and soul-jazz. However, he’s never released an album in the classic trio style – till now – hence the title ‘It’s About Time’. The two other members of the band are drummer Edwin Coleman III and sax man Renato Caranto. Mr P’s worked with the pair before, of course, but this is the first time that the threesome have called themselves a formal “trio” – not that that matters too much…. the Louis Pain sound on ‘It’s About Time’ is essentially the same as on his other albums – old school soul-jazz all the way!

Get the flavour on the delicious, bluesy ‘Big Brothers’ which has a kind of ‘Dimples’/’Baby Please Don’t Go’ thing going on. But dip in anywhere here and hear and enjoy the same flavours. All 13 tracks have been generated by the band and we’re told that each one was inspired by someone dear or influential to the writer. For instance the aforementioned ‘Big Brothers’ is dedicated to Pain’s two siblings, Lincoln and Duncan while ‘Blues For Pierre’ was inspired by his step brother. From a musical inspiration viewpoint, ‘Chester McGriff’ offers double respect to two of Louie’s organ heroes – Chester Thompson and Jimmy McGriff while ‘Mel Brown’ is homage to the drummer with whom Louie worked for many years. Mel even guests on the track. The LP’s other guests are guitarists Bruce Conte and Dan Faehnle (the former was with Tower Of Power in their heyday, while the latter has worked with amongst others Diana Krall). Guests and core players have a wealth of experience and totally understand the genre. Result – authentic soul-jazz