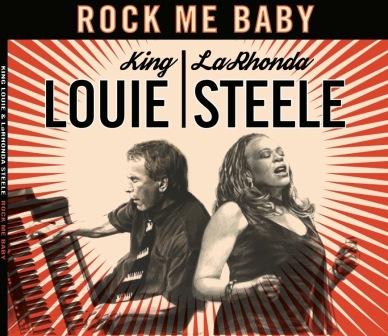 Louis “king Louis” Pain is a Portland, Oregon-based organist and his CV includes playing gigs with people like Solomon Burke, Howard Tate, Bo Diddley and Martha Reeves and he’s a popular draw in and around the Portland jazz clubs. Ms Steele graduated to soul and jazz singing via gospel and between them they’ve found a powerful chemistry, evidenced on this great old school 11 tracker that features inventive and uncompromised versions of familiar soul, jazz and blues tunes.

Given that Pain’s a Hammond B3 maestro, little wonder that the overriding soundscape of the album is 60s soul-jazz and without the benefit of sleeve notes you could easily mistake ‘Rock Me Baby’ for a lost mid 60s artefact. Best example of that is possibly the duo’s version of the catchy soul standard ‘I Love You More Today Than Yesterday’. It begins almost respectfully but then Pain and his sax man Renato Caranto take flight while Ms Steele’s powerful vocal keeps the cut rooted in soulsville. The whole thing really swings in the way that the very best soul-jazz always did. A version of the Isley’s ‘It’s Your Thing’ is another album highlight. It rides a smoother groove than the original, well-known version but Ms Steele brings some real funk to proceedings.

Elsewhere, a take on ‘Blue Moon’ offers some Latin-tinged lightness while the duo turn ‘What a Difference A Day Made’ into a bluesy ramble. Other featured songs include ‘Walking The Dog’, ‘I Wish’ and  ‘You Make Me Feel Like A Natural Woman’. The album’s focus though is a version of the Maya Angelou lyric ‘Phenomenal Woman’. LaRhonda sings with pride and passion and belief and commitment. Qualities that can’t be faked. They’re spontaneous and that’s the way that this whole alum was crafted. Both Pain and Steele believe that over rehearsal and excessive post production kills what they want to offer. LaRhonda says that “Music heals the player as well as the listener“; there’s plenty of healing here!

This wonderfully authentic album is currently available via www.cdbaby.com