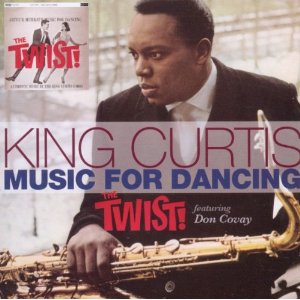 King Curtis (Ousley) is one of the great unsung heroes of soul’s formative years. The Texas-born sax man first came to prominence in the mid 50s as a session player in New York, with some of his best playing gracing the classic hits of the Coasters. As a soloist he recorded for numerous labels and this album – ‘Music For Dancing – The Twist’ was made for the Prestige/Tru Sound set up though it was actually released on RCA in 1961. The raison d’être for the LP was a simple desire for label exec and producer, Ethel Gabriel to cash in on the then booming craze for all things connected with the Hank Ballard/Chubby Checker dance , The Twist. New Yorkers in particular couldn’t get enough of it and the clubs and lounges of the Big Apple were rammed nightly with the hip and well-heeled – all wanting to show how well they could gyrate. The DJs were ever hungry for new twist records and the labels duly obliged with all kinds of takes on the dance.

To meet the demand, Gabriel brought Curtis and his band (which at the time included top guitar man Billy Butler) to the studios and gave them an odd assortment of tunes to work on. They included old big band numbers – like the old Benny Goodman hit, ‘Jersey Bounce’ alongside obvious twist songs – like ‘The Twist’ and ‘Let’s Twist Again’. Obviously those last two demanded vocals and by a quirk of fate Don Covay was in New York at the time looking for a deal and he was subsequently invited in to guest on six of the album’s tracks – including the above-mentioned two “twisters”. One of his other contributions is to ‘The Arthur Miller Twist’ – an oddly named, but authentic little twist ditty. Miller – its seems – was a famous New York dance teacher … and indeed the album was originally called ‘Arthur Miller’s Music For Dancing The Twist’, with the name of the King Curtis Combo relegated to small lettering down on the bottom of the sleeve! I guess, though, he wasn’t that bothered… it was a decent paying gig.

King Curtis, of course, went on to record dozens of albums that were a zillion times better than this innocent little timepiece – but that’s the attraction of this first time reissue. It is a wonderful timepiece – a rocking little snap shot of a particular moment in musical history – and, of course, given an extra dimension by the appearance of Don Covay on the vocals.