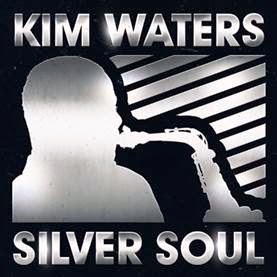 Super sax man Kim Waters celebrates his 25th anniversary in the business with ‘Silver Soul’ –his 20th long player as front man and the 12 tracker’s right up there with his best. Why? Well apart from his faultless, soul based playing and his own polished and slick production the album is big on variety.

First up there’s plenty of the sophisticated smooth jazz that has become Waters’ signature sound. He sets that stall out right from the start with the opener, ‘Dreaming Of You’. This one is a definition of smooth jazz… the groove is soul-based, the melody is an insistent little ear-worm and his daughter, Kayla Waters adds counterpoint with some sparkling piano. ‘On A Mission’, ‘Go-Go Smooth’ and ‘Cruising Round Rock’ offer more of the same though none of that trio is quite as infectious as ‘Dreaming Of You’. ‘High Stride’ is a tad tougher – about as funky as smooth jazz gets, while ‘Let’s Make Love’ is the big Quiet Storm moment.

If you like things a little lighter (blander even) then there are a couple cuts that stray into Kenny G territory – the cover of John Legend’s ‘All Of Me’ and ‘A Song For Dana’ (Dana being Mrs Waters… more of her later).

Much more satisfying, at least to these ears, are the vocals and there are plenty here. Standout is ‘Laying Beside Me’. This one features Eric Roberson out front, and as his own new solo set shows, Eric is shedding the neo/nu soul sensitivity for a proper soul attack. ‘Anything You Need’ is another fine soul tune by anyone’s standards. This is the one that sees Kim’s other half (Dana Pope) take to the mic and she proves what hubby can do on the sax she can match with the vox pop! The other vocals are the dramatic ‘Fireflies’ featuring Zendaya and the meandering ‘Stay Together’ on which the singer is Kim himself.

Yes, so after 25 years in this business Kim Waters (and his family, of course) prove they know how to craft the consummate smooth jazz album. … happy Silver Anniversary!