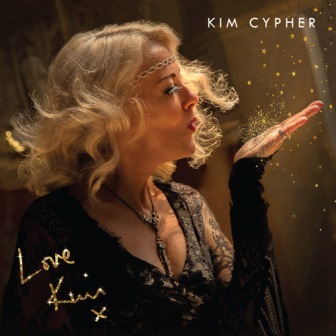 Kim Cypher is one of a growing breed of lady sax players but the talented Ms C doesn’t just play horn; she’s a dab hand at jazz vocals too as this, her latest, LP attests. You see the immediate grabber here is a lovely, slowed down treatment of the Zutons/Amy Winehouse song ‘Valerie’. Kim sets it firmly in the late night jazz lounge and it’s quite transformed…. no sax solo either; indeed, no sax input at all. A vocal version of Hoagy Carmichael’s ‘The Nearness Of You’ gives Kim another opportunity to show off her vocal prowess. It’s a respectful cover and rather than take the sax part herself, she leaves it to someone called Pee Wee Ellis!

There are three more vocals on the 11 tracker – the self-penned, Latino swayer ‘Maybe’, ‘Rising From The Dust’ – another original, rather sombre and Sam Stept’s old Broadway show tune ‘Comes Love’ which also allows Kim to showcase her sax playing.

Best of the instrumentals is a new look at Bobby Womack’s “Breezin” . Running out at over 7 minutes, it’s an album highlight and wisely Ms Cypher gets right away from the well-known George Benson version though Lee Jones’ guitar is beautifully sonorous throughout. It’s just such a great tune, though!

There are two other big covers – a look at ‘Baker Street’ and a take on ‘People Get Ready’ . On ‘Baker Street’ Kim embraces the big sax intro before launching into the familiar melody. It works. Sadly ‘People Get Ready’ doesn’t work so well. After a traditional start, the sax solo soars away at breakneck pace while if you factor in the rocky guitar, I’ll contend that you’re moving away from the retrospection and inner peace that dear old Curtis was searching for in the song.