KID CREOLE AND THE COCONUTS: I Wake Up Screaming (Strut) 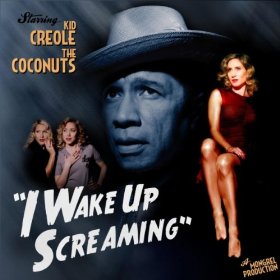 August Darnell’s musical CV goes way back to the fondly-remembered Dr. Buzzard’s Original Savannah Band. But he’s best known for his Kid Creole alter-ego. Fronting the Coconuts, the “Kid” enjoyed a string of hits which mixed novelty, Latin jazz, tropical flavours and vaguely disco rhythms. Since then, Darnell/Creole has continued to work and now resides in Sweden where – in his own studio – he’s just recorded this – his “comeback” album.

The good news for Kid Creole fans is that nothing seems to have changed. Tracks like ‘I Wake Up Screaming’, ‘Love Remains’ and ‘Just Because I Love You’ are rehashes of stuff like ‘Annie I’m Not Your Daddy’. The bad news is if that you never were a fan, nothing on the 13 tracker will make you change your mind. The three aforementioned songs are OK of their type and are only maybe bettered by the Latin romp of ‘Verily, Verily, Verily’. Elsewhere ‘Blow Me Up’ is a hugely theatrical ballad while ‘I Do Believe’ is a big, Moroder-esque slab of Euro disco. More of that on ‘Stony And Cory’ and ‘We’re Rockin’ Tonight’ while the over-dramatic ‘Long Live The King’ is mightily bombastic and to be avoided!

Darnell knows the sound that brought him the hits and here he more or less replicates it. Yes, if his old fans still buy music they’ll love this … but I fear the majority of listeners will pass.