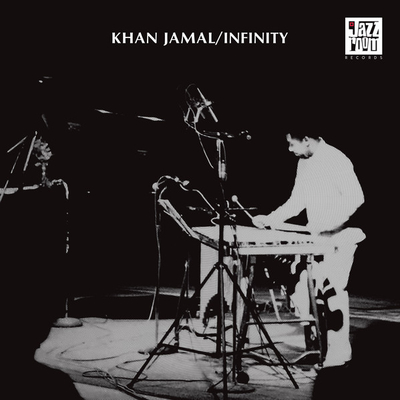 Original copies of this highly collectable album, first released via the small indie label Jambrio in 1984, can exchange hands for almost four figures but now thanks to the UK’s enterprising Jazz Room label, you can pick it up as an LP reissue for around twenty quid. Jamal is a cult vibraphonist and marimba player who was born Warren Cheeseboro in Jacksonville, Florida, before embracing Islam and changing his name. By then, he was living in Philadelphia, where he’s still based. His career got off the ground in the 1970s when he played in the groups of both saxophonist Byard Lancaster and drummer Sunny Murray, who both contributed to ‘Infinity,’ his third long-player.

Style-wise, Jamal is not indebted to the likes of Lionel Hampton and Milt Jackson but has more in common with adventurous, post-bop vibes masters like Walt Dickerson and the late Bobby Hutcherson. His individuality is immediately apparent on the album’s opener, ‘Nubian Queen,’ a beautifully lyrical piece that could be described as a swirling soul-jazz symphony defined by a haunting theme, where Jamal’s soaring vibes melody is doubled by Byard Lancaster’s mellifluous flute. It’s eight minutes of pure celestial bliss. There’s more of a deeper sense of yearning on the album’s title piece, which begins with Lancaster’s searching saxophone line over a hypnotic groove. By contrast, ‘Lovely Afternoon’ is wistful and dreamy, showcasing Jamal’s cascading mallet work. Just as attractive sonically but a little more mystical in mood is the churning ‘The Known Unknown,’ while the five-track set’s driving closer ‘The Angry Young Man,’ is a fiery, urgent piece that shows that there’s much more to Jamal’s music than pretty melodies.

If ‘Infinity’ had been released on Blue Note, for example, it probably wouldn’t have languished in obscurity for so long and would certainly have found a larger, more appreciative audience. Now, though, there’s a chance that this excellent Jazz Room reissue, which reproduces the original LP artwork, will bring Khan Jamal’s finest long-player the wider recognition it undoubtedly deserves. (Since this review was posted, Jamal has passed away; he died on January 10th, 2022 aged 75).