KENYA; My Own Skin (Expansion) 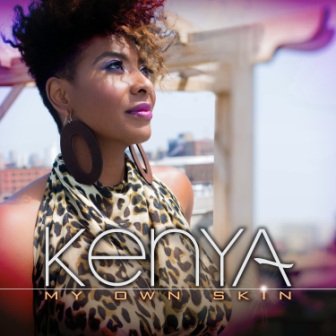 Kenya (Johnson) hails from Denver, Colorado but currently works out of Chicago. She learned her music craft as part of the famed Howard Gospel Choir, working with people like Yolanda Adams and Bebe & Cece Winans. Cagey enough to know that the route to musical fame and fortune is a tough one and that success is never guaranteed, Ms Johnson grabbed some top qualifications- she has a BSc in Physical Therapy and an MA in Counseling & Student Development and works in higher education. All the signs though indicate that that day job may well be put on hold and education’s future loss will be soul’s huge gain because there’s a real buzz on this – Kenya’s debut album.

The interest has been created via two early singles from the long-player. First up there was the lazy, jazzy ‘Wednesday Girl’ then came the LP’s title cut – a clever, Latin-tinged dancer. Both tunes won the hearts of soul tastemakers and both cuts stand out on the album –especially ‘Wednesday Girl’ which is offered in its full 7 minutes-plus edit and in a fab ‘Knights Over Egypt’ remix where the obvious source is the Jones Girls classic. Check out the great horn solo on the tune!

There are plenty of other goodies on the album too – notably the sassy, brassy dancer , ‘Take Me Away’, the pleading ballad ‘Be Here’ – complete with some biting Ernie Isley style guitar and the catchy, mid-tempo duet ‘Makeusmile’. Kenya is even confident enough to cover a Michael Jackson hit and she makes a great job of ‘I Can’t Help It’ – taking it at a different pace than MJ but retaining all the quality of the original.

Elsewhere you can expect contemporary neo/nu soul flavours – as on ‘Mirror’ and ‘Brown skin’ which, as befits the genre, has a provocative lyric offering a deeper and more spiritual look into the plight and tragedy of violence amongst African American males.

Kenya is the album’s executive producer but she was savvy enough to bring in other producers to help her flesh out her ideas. So input from people like Kendall Duffie (Kloud 9), Khari Cabral Simmons (Jiva), Darren “Daz I Kue” Benjamin (Bugz in the Attic), Mark de-Clive Lowe, and Grammy award winner Maurice Joshua ensure that the project goes beyond a mere vanity affair and, of course, ensures plenty of variety. Between them they’ve crafted a proper modern soul album.