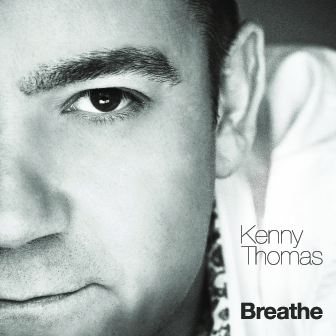 With his last album Kenny Thomas proved what proper soul fans already knew. The secret was out – the genial North Londoner was much more than the chirpy popstser who enjoyed chart action back in the early 90s. Moreover, in ‘Him’ Kenny had crafted a true soul classic which easily stands comparison with masterpieces from giants of the genre. After too long a wait Kenny’s back with a brand new album and the great news is that it’s every bit as good as ‘Crazy World’.

On ‘Breathe’, Mr T continues the trajectory he began with ‘Crazy World’. To help him deliver he uses a whole team of top producers – amongst them Mark James, Danny Saxon, the 5AM crew, Sir Piers, Tony Economides, Richard Earnshaw and the Drizabone team. Those last two are responsible for the album’s best dance, up front numbers. The Drizabone collaboration is the pacey ‘Baby It’s You’ and it will cause delight right across the soul scene. Self-perceived sophisticated modern soul roomers will be won over by its elegance while soulful house heads won’t be able to resist the tight beats. Richard Earnshaw serves up more of the same on ‘On The Outside’. It’s supremely catchy – but then so too are the other big swingers – the mid-tempo ‘Unconditional Love’, the urgent title cut, and the subtle remake of ‘Thinking About Your Love’.

The set also boasts some delightful ballads. Amongst them are a lovely ‘It’s Better’ and a quite beautiful ‘Get Out’. The former is built around a clever guitar riff that hints at ‘It’s A Shame’ and ‘I’ll Be Around’ while the latter is a remarkable duet between Kenny and his wife Fransisca. It’s every bit as good as anything currently coming from the big soul players Stateside.

Mrs. T is also responsible for the album’s quirky opener, ‘The Show Is Over’. She penned the clever little song and it shows that Kenny is quite prepared to risk something just a little different. He develops the gambit on ‘It Ain’t Perfect’ and the rhythmically varied ‘Trouble Man’… and it’s not just the title that alludes to the Marvin Gaye classic. The experimentation continues with the closing cut, ‘Addicted’. This is a long (7 minutes plus) workout that has a strangely eerie feel to it. Its complexities attest to what Kenny Thomas is now about. He’s staying firm and true to the soul music that inspired him (his roots go deep remember) but like his heroes he’s confident and talented enough to expand his horizons. ‘Breathe’ takes soul’s King Kenny into new areas whist remaining respectful to where he’s been.