KENNY LYNCH; Up On The Roof (Jasmine) 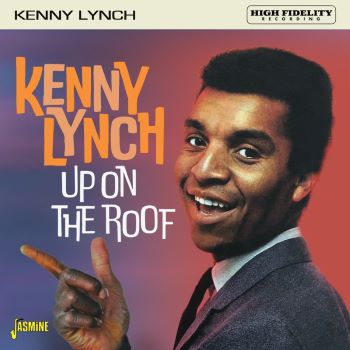 Kenny Lynch, who died in December 2019, was a something of a one-off. It’s hard to think of anyone else who enjoyed such a varied showbusiness career. The music books will tell you he was a singer and all-round entertainer, but he was much more than that. Born in London in 1938, Kenny went into show business after his National Service, and he began as a jazz singer working the Soho clubs. A pop career soon followed but he then veered off into what we might call “light entertainment”. He appeared regularly on TV – hosting quiz shows, playing the foil to TV comics, doing his own stand-up and, of course, singing. He appeared in several movies (including a ‘Carry On’) and was a successful songwriter penning songs for Cilia Black, the Hollies, Small Faces and many others. If that wasn’t enough, he was also a Northern soul hero – his ‘I Just Wanna Love You’ and the still popular slowie ‘Movin’ Away’ were “big” on the scene and his 1983 release ‘Half The Day’s Gone And We Haven’t Earned A Penny’ was a popular tune of the 80s Brit soul scene. To cap it all, Kenny was awarded the OBE in 1971.

There are a number of Kenny Lynch compilations out there but if you want to catch up on his early music career, may we point you to this new 20 track Jasmine collection, ‘Up On The Roof’, named for his biggest pop hit – his excellent cover of the Drifters’ classic. The album spans the years 1960 – 1962 and shows a real variety in repertoire. As was the way in the early 60s, there are plenty of covers. UK artists and their managers were quick to pick up on US hits and issue their own versions in the hope of scoring a domestic hit. The aforementioned ‘Up On The Roof’ is a great example. And Kenny was quick to cover plenty more Brill Building songs, like Burt Bacharach’s ‘The Story Behind My Tears’, Bill Giant’s ‘Steady Kind’ and ‘It Would Take A Miracle’. ‘Puff (Up In Smoke)’ was another Lynch song that proved popular (despite) its quirkiness on the Northern soul scene. That too was a cover of a song written by Brill Building tunesmith, Bill Giant. The album offers a nod to Kenny’s club jazz roots with things like ‘Jump On Your Broomstick’ and there’s also several novelties including a brace with Barbara Windsor. The album ends with the previously unissued ‘Give Me Love’ – one of Kenny’s own songs and which features some wonderful sax work from Tubby Hayes. The song was intended for the movie, ‘Dr Terror’s House Of Horrors’ and it’s a satisfying conclusion to an album that serves as a wonderful homage to dear old Kenny Lynch.