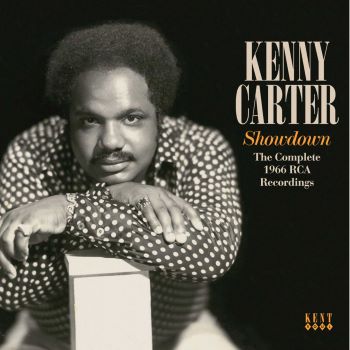 Kenny Carter is what’s blithely know as a “cult soul icon”. That’s to say we don’t know too much about him and the few records he released, never hits, have long been revered by those who claim to be soul connoisseurs. What we do know about Kenny is that he was born in Akron, Ohio in 1940, but by the early 60s he was in New York and released a few singles with little success. After hustling around the Brill Building looking for work a songwriter/ demo artist he was, out of the blue it seems, signed to RCA Records. There the execs seemed to have bags of faith in him, setting up sessions with noted arranger Garry Sherman (most famous for Lorraine Ellison’s ‘Stay With Me Baby’). Sherman lined up a huge orchestra and some top backing singers (including Ashford and Simpson) to work with Carter and through 1966 they cut something like 22 tracks for a series of singles and a putative album. RCA issued three singles on their new signing, but none meant anything, and the album was shelved with little explanation.

Carter drifted away from RCA but continued to record if sporadically. Sometimes he was Kenny Carter, sometimes he used the name Kenny Head (his father’s surname) and he also recorded with the Detroit Magnificents. His final known recording session was for Atlantic in 1972 but success remained elusive and he died aged just 50 in November 1990.

His legacy is the music he left behind, and Ace/Kent have just issued this splendid retrospective of his work at RCA. The album offers the released singles, a clutch of songs that have appeared on previous Kent compilations and 13 previously unreleased tracks that, presumably, were to be the core of the never-issued long player.

Sonically the music is the classic big ballad sound of mid 60s New York… think Lou Johnson, Tommy Hunt, Jimmy Radcliffe, Chuck Jackson et al and with Sherman as arranger you’ll know that the sound is big, over-blown even! The repertoire falls into two distinct categories. First there are the original songs like the quite lovely ‘Living In The Land Of Heartache’ and the up-tempo ‘I’ve Got To Get Myself Together’. That latter was one of the released singles and it won plenty of support from the Northern soul crowd. Then there are Carter’s versions of American standards like ‘Every Time We Say Goodbye’, ‘Body And Soul’ and ‘Smile’.

But whether Kenny Carter was handling original material or a well-known cover, his magnificent baritone made the song his masterful own. To hear just how good he was try ‘Showdown’, the track for which the album is named. This was Carter’s second RCA single and, inexplicably, a resounding chart flop. In 1997 Dave Godin highlighted the track on his first ‘Deep Soul Treasures’ collection and if that’s not recommendation enough to investigate Kenny Carter a little more, I don’t know what is!