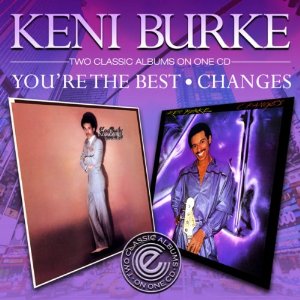 The musical Burke family were discovered in Chicago by Fred Cash of the Impressions and as the Five Stairsteps they were soon recording for Fred’s boss, Mr Mayfield. Blessed with a fab soul voice as well as being adept on the bass, Keni eventually fled the family nest – first playing In Billy Preston’s road band and then recording for George Harrison’s Dark Horse label. By the 80s Keni was pacted with RCA – the source of these two wonderful albums brought properly to CD for the first time as a “twofer” by Ralph Tee’s Expansion label.

The release is something of a labour of love for Ralph, ‘cos like many soul fans of a similar vintage these two albums represent something very special to him… I guess just how special depends of course where you were physically and mentally at the time. That said, though, listening objectively the two sets are superb examples of 80’s soul. They’re stuffed with great songs – originals and covers; the productions are sensitive and never dominate; and I guess most importantly both (i.e. songs and productions) are totally geared to get the best from Keni’s voice, which – like his onetime mentor’s (Curtis Mayfield) – can offer fragility and grit in equal measure. Ironically one of the best cuts on the set is the gorgeous ballad, ‘Never Stop Loving Me’ – written jointly by Burke and Mayfield – and also recorded by the Gentle Genius on his ‘Something To Believe In’ LP. It’s hard to choose between the two but let’s just say it stands out here. Other standouts are (obviously) ‘Rising To The Top’ and its near relative ‘Hang Tight’; a version of Todd Rundgren’s ‘Love Is The Answer’ is a beaut too (reminiscent of how Ronnie Isley treated Rundgren’s ‘Hello It’s Me’) while ‘Painting Of Love’ is similarly excellent.

In truth some of the up-tempo cuts haven’t travelled time that well (I’m thinking ‘Night Riders’ and ‘Shakin”) but even those have the redeeming features of Keni’s vocals and his bubbling bass lines. Again, though, I’m sure for those whose soul entry point was late 70s/80, those cuts will get now-ageing toes tapping and if you want more – the driving title cut from ‘You’re The Best’ comes in two versions – a 12″ disco remix rivalling the original. Keni Burke has only recorded sporadically since these two epics failed to have major impact. He did, of course, record an album (‘Nothin’ But Love’) for Expansion in 1998 but maybe he knew deep down that these two RCA set represent a pinnacle for him – I know Ralph Tee and a few more would agree.