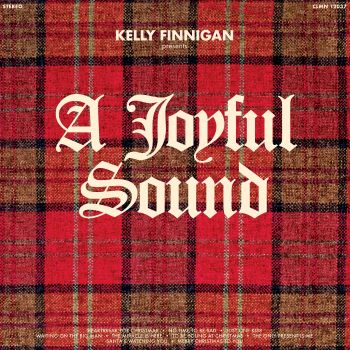 I’ve read hundreds of music books (written a few too!) but nowhere have I seen it explained why artists, across all genres, feel the urge to make a Christmas album sometime in their careers. Obviously, there’s the prospect of big royalties if one of your efforts becomes a Yuletide standard. But that’s rare and what about creativity and artistic integrity? If you examine most Christmas albums they’re largely unimaginative re-treads of the same old festive fare and ironically your new ‘Winter Wonderlands’ and ‘Frosty The Snowmans’ were probably recorded in a  sweltering August studio to give the labels the time to pimp, preen, package and promote the album in time for the nostalgia-fuelled Christmas bonanza.

Latest artist to succumb to the lure of the Christmas album is, surprisingly, Kelly Finnigan. I say “surprisingly” because of Mr F’s background and track record. You see the 38-year-old Californian (whose father was a session keyboardist working with people like Etta James and Joe Cocker) began his musical odyssey with hip hop collective the Destruments who specialised in instrumental tracks! The group moved from LA to Oakland in 2007 but those familiar “musical disagreements” led to the band disbanding in 2009! Then in 2010 Kelly found funk as a vocalist (he’d previously pounded the drum kit!) in Bay Area band the Monophonics. In 2015, the band sort of “cooled off” and Mr F went on to do his own thing … the result being his wonderful solo album ‘The Tales People Tell’. The sound of both Finnegan’s solo output and with the Monophoncis is rough and tough; they call it “heavy soul and psyche rock” and, listening, you wouldn’t argue. Equally with his band and/or solo, you’d never guess that Finnegan harboured desires to craft a Christmas album. Well here it is… shows you what I know!

Unsurprisingly, given what we’ve just said, the 11 tracker that is Finnigan’s ‘A Joyful Sound’ doesn’t sound much like a traditional Christmas album. There are no re-treads of the familiar Yule chestnuts (or should we say turkeys); all the songs are originals and there aren’t many seasonal effects – sleigh bells, ho-ho-hos and/or neighing reindeers. Indeed, the collection should be seen as an original, contemporary soul collection with song lyrics that just happen to reference Christmas.

There’s lots to enjoy here. Right now, we’re loving the Philly influenced ballads, ‘To Be Young At Christmas’ and ‘Merry Christmas To You’. Then there’s the Memphis-flavoured ‘The Miracle Is Here’. Elsewhere you can enjoy Marvin Gaye-esque flavours – as on ‘Just One Kiss’. Then there’s a nod to Northern soul on ‘Santa’s Watching You’. This is one of two of the  more overtly “Christmas sounds” on the album (a jingle bell intro and lyrics that will remind you of ‘Santa Claus Is Coming To Town’). The album’s  title tune which opens and closes the collection has a traditional feel  too – but it is a “Joyous Sound”. So, we can take that.