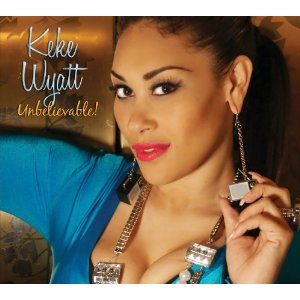 ‘Unbelievable!’ is Keke Wyatt’s third solo album and reflects the personal joy and happiness she’s now experiencing after a particularly troubled period in her life and career. She’s where she’s at now because of a new, loving relationship and because she continues to find solace in religion and her love of gospel music, and two of this album’s big tracks work on both those levels. The bright pair of opening songs – ‘Light Me Up’ and ‘Unbelievable’ – celebrate the transforming power of new love and their messages apply to both the secular and spiritual contexts. Elsewhere, covers of Miki Howard’s ‘Love Under New Management’ and Alexander O’Neal and Cherelle’s ‘Saturday Love’ are unambiguous. On the former Keke proves what was previously indicated … she’s a real soul contender, while the latter is just a great slice of good time soul. Ruben Studdard, by the way, reprises the Alex O’Neal part.

The album’s other big set piece is the three way ‘Mirror’. Here Keke is joined by Tweet and Kelly Price and together they cover the subject of domestic violence . Psychologists say that facing demons is the best way to conquer them and here the three sisters tackle this particularly vile demon head on and leave no room for excuses or mitigation. ‘Enough’ touches on the same subject matter. Heavy indeed… but leavened and lightened by pleasanter items like the J. R Hutson-penned ‘Miss Your Plane’.

The album’s big gospel number is a searing, a-cappella version of ‘His Eye Is On The Sparrow’ and there’s also a cover of Eric Clapton’s ‘Tears In Heaven’ which is oddly out of context with the rest of the material. It’s sung and produced well but it doesn’t seem to add value to the album. There’s talk of Keke doing a reality TV show (working title, ‘R&B Housewives’) with Faith Evans, Nicci Gilbert, Angie Stone, Kelly Price and Syleena Johnson. Hopefully it will give her more exposure and make more people aware of a seriously strong, “proper” soul singer.