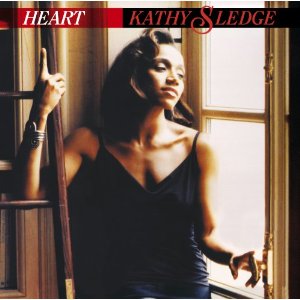 In 1992 Kathy Sledge left Sister Sledge to forge a solo career and Stateside she enjoyed some success. She had a couple hits and starred in a number of stage musicals before rejoining her sisters for the inevitable “oldies” tours. The source of her two hits was the album ‘Heart’ which has just won a reissue via the specialist Super Bird label.

The hits – ‘Take Me Back To Love Again’ and the LP’s title cut – open proceedings and both are sedate dancers with their own jauntiness. Kathy’s in tremendous vocal form on them but the rather predictable electronic drum tracks on both cuts place them firmly in their own era… and that’s the problem with the album. Kathy worked with a whole team of producers – Troy Taylor, Bryan Loren, Barry J Eastmond, Leml Hughes amongst them – but all relied too heavily on electronic instrumentation which invariably works against any vocalist trying to wring proper soul from the lyrics. That said the album does yield a couple of decent offerings. ‘Reason For This’ is a pleasing ballad – if a little Whitney-esque, while ‘Baby, Baby, Baby’ (credited to a production team called “The Ghost Brothers”) is a great, snappy dancer that would stand some investigation. It reminds me of Jennifer Holiday’s lovely ‘Love Stories’. It’s a good little tune though I’d need to pass on ‘Every Little Way’ and ‘Pleasure’.