KASHIF: Kashif and Send Me Your Love (Super Bird 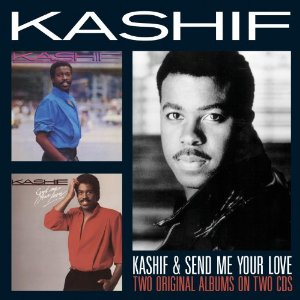 Kashif was born Michael Jones in 1959 and he was a key member of BT Express. His moog and synth parts helped give the band their distinct sound. He surprisingly left the group in the early 80s to form a new band called Stepping Stone and at the same time he created a production company – Mighty M and through it he worked successfully with people like Evelyn “Champagne” King. In 1983 he was signed to Arista Records, who, it was said at the time, were looking for their equivalent of Prince. Whatever, Kashif debuted with a sparkling self-titled set that yielded four hits while the follow up – 1984’s ‘Send Me Your Love’ – spawned more hits and even Grammy nominations. If you missed both albums first time around, or indeed want to re-assess the Kashif sound , now’s the time as reissue label Super Bird have just put both LPs out on one neat double CD package.

1983’s ‘Kashif’ is very much a time piece. The musical sound is synth heavy while the tunes, rhythms and vocal presentation have echoes of the then sound of people like George Benson and Luther Vandross while Kashif’s ‘I Just Gotta Have You’ was uncannily re-echoed in Steve Arringtron’s 1985 ‘Feel So Real’. Most of the cuts – including the hits – were aimed at the dance floor, though ‘All’ is a sweet ballad in the style of George Benson’s ‘In Your Eyes’. The ‘Send Me Your Love’ LP was a much more ambitious affair with a decent guest list that included George Benson, Whitney Houston, Kenny G and Al Jarreau while people like Lillo Thomas and Melissa Morgan helped out on backing vocals. Prettiest of the songs is ‘Are You The Woman’. It’s like one of those big Whitney Houston songs and there are no prizes for guessing that, yes, this is the song that Whitney (briefly) guests on. More full on is the Benson collaboration ‘I’ve Been Missing You’ while ‘Call Me Tonight’ is a crunchy synth-led instrumental which was surprisingly Grammy-nominated. Much easier to hear why the other Grammy – nomination -‘Edgartown’ – picked up that particular accolade; on it Kashif engages in clever scat vocals with Al Jarreau.

So, two good 80s albums here and each offering a bonus cut. On the eponymous album you get a live recording of the hit ‘Help Yourself To My Love’, while ‘Send Me Your Love’ has the radio edit of ‘Baby Don’t Break Your Baby’s Heart’ as the bonus.