KASHIF: ‘Help Yourself To My Love – The Arista Anthology’ (SoulMusic Records) 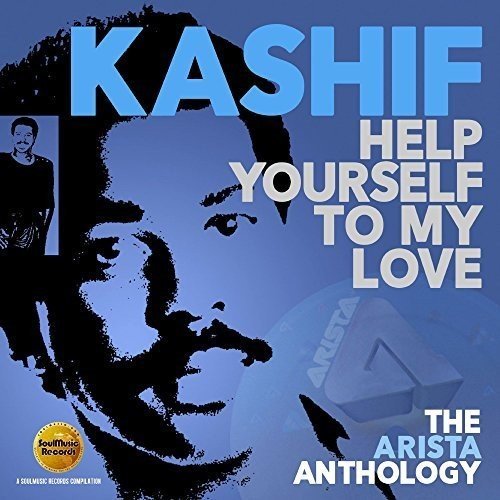 Producer and singer/songwriter Kashif Saleem was a pioneering trendsetter in the early 1980s, spearheading a new kind of keyboard-dominated R&B that was defined by an electro minimalism reliant on fat synth bass lines and lean drum machine grooves. As a solo artist, he enjoyed a particularly fertile spell at music mogul Clive Davis’s Arista Records between the years 1983 and 1989 and it is that fecund period that falls under the spotlight of this superb 2-CD/30-track retrospective.

Originally born Michael Jones, Kashif endured an unfeasibly tough upbringing – his mother was a drug addict and he was placed in the care of a foster family who cruelly abused him – but he discovered joy and salvation in music at school. Initially, the flute was his only instrument but he quickly gained proficiency at other instruments and at the age of twelve he was playing professionally.  Fast forward a few years and he was playing keys for disco-funk band, B.T. Express, where he also began to flex his muscles as a composer. He outgrew the band and then played keys for Stephanie Mills before joining Morrie Brown’s Mighty M Productions in 1981 where he wrote ‘I’m In Love’ for Evelyn ‘Champagne’ King, which would get him noticed by Clive Davis at Arista who hired to work with the Average White Band and then saxophonist, Kenny G.

It wasn’t long before Kashif was cutting his own album for Arista, 1983’s eponymous LP, which yielded his debut hit single, ‘I Just Gotta Have You (Lover Turn Me On),’ which is the opening cut on this compilation featuring singles, B-sides, choice album cuts and noteworthy extended mixes (and remixes). Its sparse instrumentation comprised of syncopated Moog bass, a staccato rhythm guitar mostly playing single notes, and shimmering keys, came to set a stylistic paradigm for urban music in the early ’80s and was much imitated. The vocals, too, were striking, particularly the sweetly harmonized background voices that counterpointed Kashif’s plaintive lead vocals. Other gems from this period include the fabulous dancers, ‘Help Yourself To My Love,’ ‘Stone Love’ and ‘Rumors.’

But Kashif just wasn’t a master of the romantic dance groove, he was also a great balladeer, exemplified by the gorgeous mid-tempo ‘Say Somethin” Love,’  ‘Are You The Woman’ and the pleading ‘Send Me Your Love.’  His 1987 duet with Meli’sa Morgan on a passionate retread of Mother’s Finest’s ‘Love Changes’ is another highpoint here (the ‘A Capella’ mix of the same track is also included as a bonus). It’s the first of several collaborations featured on the romantic-themed second CD, including duets with Dionne Warwick (‘Reservation For Two’) and Kenny G (‘Love On The Rise’).

Kashif, who passed away last year aged 59, was an important figure in the evolution of R&B music in the 1980s but his contribution has often been overlooked. Now, though, his talent and music finally get commemorated by lovingly-curated  compilation that they truly deserve.