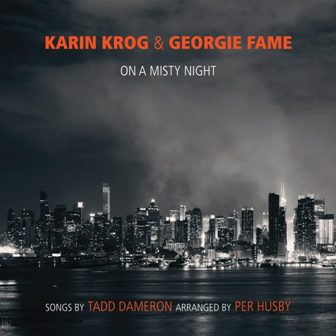 Jazz connoisseurs know all about the magic of Cleveland born pianist, composer and arranger Tadd Dameron, best known perhaps for his tune ‘On A Misty Night’. One of Dameron’s biggest advocates is national treasure George Fame. Georgie has recorded ‘Misty Night’ on at least two occasions and regularly features it in his live shows, so when he was invited to join a musical tribute to Dameron, he jumped at the chance.

The invite came via Norwegian jazz pianist Per Husby who was persuaded by jazz chanteuse Karin Krog to investigate the oft-neglected work of Dameron. This was back in 1983 when Husby and Krog recorded four Dameron songs that, sadly, were never released at the time. The duo presented the songs at the Molde Jazz Festival in 1984 and despite a tape running, the live recording was deemed poor quality and never issued. Then ’85 a CD, ‘Dedications’, was finally released by Hot Club Records. By this time George Fame had come on board after Husby had asked him to add lyrics to a number of the tunes and the album eventually won a Norwegian Grammy.

In 1996 the Husby/Krog pairing was resurrected by record label owner Bjørn Petersen who had the team record more Dameron songs in New York but after a “soft” and critically acclaimed release the project floundered.

Ms Krog, though, is nothing if not dogged and last year managed to persuade Odin Records that there was just too much good music in the can to lay unappreciated. So the label team put together this “new” Todd Dameron tribute album which contains recordings from 1984, ’85 and ’96.

The album is named for Dameron’s best-known song and this 7 minute plus version of ‘On A Misty Night’ opens proceedings. On it Fame and Krog share the vocal as they do on other Dameron classics like the sprightly ‘Dig It’, ‘That’s The Way it Goes’ and the clever medley of ‘Good Bait’ and ‘Ladybird’. Georgie’s out on his own on ‘Accentuate The Bass’ while Ms Krog enjoys five solos including the surprising ‘I’m Never Happy Anymore’. She also features on the medley of ‘Fontainebleau’/’Trane’ and ‘That’s The Way It Goes’. Both those tracks, from the live Molde Jazz Festival recording, have never been issued in any format before.

It all sounds very confusing, doesn’t it? At last, though, more jazz fans can enjoy more of the artistry of Georgie Fame and Karin Krog, the arranging skills of Per Husby and, above all, the wonderful tunes of Tadd Dameron.