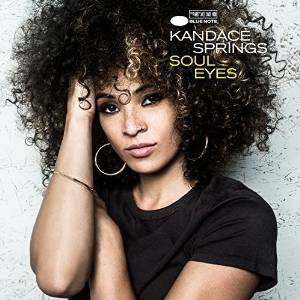 Nashville’s Kandace Springs turned heads and won hearts earlier this year when she supported Gregory Porter on his UK tour. Prior to that the singer/songwriter/pianist had impressed no less a personage than Prince who, after hearing her soul-soaked version of Sam Smith’s ‘Stay With Me’, had her perform at his 30th anniversary ‘Purple Rain’ celebrations. Before that her 2014 EP won Kandace high-profile media attention with her particular take on contemporary US R&B.

However, for this, her debut solo set, expect something quite different. Back in 2002 Ms Springs was given a copy of Norah Jones’ ‘Come Away With Me’ and the sound of that album (particularly ‘The Nearness Of You’ track) was the sound that Kandace always aspired to. So after adventures in R&B and a dalliance with Prince, the artist and her collaborative producers Carl Sturken and Evan Rogers decided to create an album that offered a more spacious, more soulful, organic sound that would betray both jazz influences and Nashville roots. To help them deliver, the team brought in Grammy award winning producer Larry Klein (whose credits include work with Lizz Wright, Melody Gardot, Joni Mitchell and Herbie Hancock). Klein simply told Kandace to “go in and play what you feel” and the outcome, the 11 tracks that make up ‘Soul Eyes’, is already being touted as one of THE soul/jazz album of the year. Critics on both sides of the Atlantic have already made the obvious comparison with Norah Jones while others are mentioning Ms Springs’ name in the same sentence as people like Ella Fitzgerald, Billie Holliday, Roberta Flack and Nina Simone.

Sure there are traces of them all in ‘Soul Eyes’ but Kandace Springs is no mimic; she’s crafted her own take on a classic sound. Hear it at its very best on the album opener, the superlative ‘Talk To Me’. It’s a gentle, insinuating tune but none the less passionate and “felt” for that. A version of Judie Tzuke’s ‘Place To Hide’ is another album gem. Rivalling it for forlorn passion is ‘Too Good To Last’, a song whose melancholy is heighted by a soaring trumpet solo from Terence Blanchard. Blanchard is just one several high profile players on the album, but despite their presence (Dean Parks, Jesse Harris, Vinnie Colaiuta et al) Kandace remains the star focus.

Other reviewers elsewhere have singled out cuts like covers of ‘The World Is A Ghetto’ and ‘Leavin” (that lovely Shelby Lynne song) and Kandace’s own ‘Rain Is Falling’ as album highlights. In truth, every track is a highlight. Earlier his year when my colleague, Charles Waring previewed this album he warned us all to “prepare to be impressed”! I am; you will be.