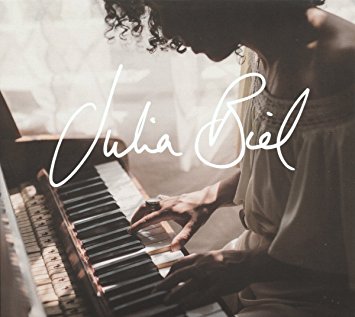 For the past several years Julia Biel has been making quite a name for herself on the London club and jazz circuit. Brought up in the capital but of South African heritage, young Julia mastered the piano and after graduating from Oxford with a languages degree she became a fixture on the London scene with her musical and life partner, bassist Idris Rahman. Her first album was the low key ‘Not Alone’ which won Ms B a “Rising Star” at the 2006 BBC Jazz Awards. It took nine years for a follow up to materialize but ‘Love Letters And Other Missiles’ brought a MOBO nomination, an Urban Jazz Award and plaudits from taste makers like Jamie Cullum.

Maintaining the momentum, Julia is all set to release her third album at the start of February. The long player was prefaced by the single ‘Wasting Breath’. The broody jazz/pop tune was played out on some of the more sophisticated jazz stations where listeners expect and appreciate elegance, artistry and commitment. Indeed those are the dominant traits of the album. Hardly surprising when you learn that Julia’s heroes and influences number icons like Billie Holliday and Nina Simone. No surprise too to read that commentators have made comparison between Julia and Amy Winehouse; those same influences were dominant in the tragic North Londoner’s formative years.

The musical soundscape and vocal styling of this eponymous 12 tracker recalls much of dear old Amy’s work (I’d suggest a similarity to Corinne Bailey Rae too); the difference, however, is that though Ms Winehouse could “do bleak” she could also work up a head of optimistic steam… think ‘Valerie’ or even ‘Rehab’. At this stage though Ms Biel is happy (not quite the right word) to stick with the bleak. Song titles like ‘Critical Condition’, ‘The Wilderness’, ‘Dead Slept Rough’ and, especially ‘You Could Turn A Rainbow Grey’ sound like their titles… melancholic, introspective and yes, bleak. An elegant and intriguing kind of bleak, but it would have been more intriguing to hear some optimism and joie de vivre. ‘Emily’ is as about as “up” as this album gets, but, hey, maybe the music reflects exactly where Julia Biel is right now.